EXCLUSIVE: In a letter provided to theGrio, Tuskegee Airmen Inc. said the retired general is 'uniquely positioned' to head the Pentagon 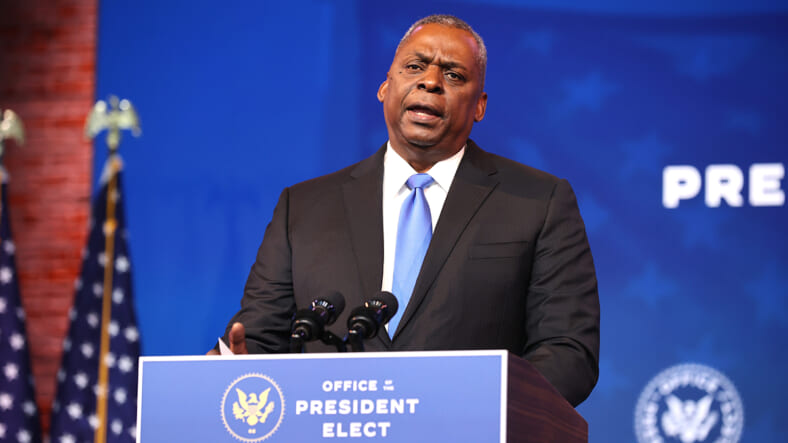 U.S. Army (retired) General Lloyd Austin speaks after being formally nominated to be Secretary of the Department of Defense by U.S. President-elect Joe Biden at the Queen Theatre on December 09, 2020 in Wilmington, Delaware. (Photo by Chip Somodevilla/Getty Images)

The Tuskegee Airmen have come out in support of Gen. Lloyd Austin, President-elect Joe Biden‘s nominee to serve as the 28th Secretary of Defense, amid expressed opposition from some U.S. Senators who have signaled they would not support his nomination.

In a letter provided exclusively to theGrio, the Tuskegee Airmen Inc. national office expressed their support for Austin, a retired four-star Army general who served 41 years in the armed forces before his retirement in 2016. If confirmed by the U.S. Senate, Gen. Lloyd would become the first Black American to serve as the nation’s defense secretary.

“We write to express our enthusiastic support for the nomination of General Lloyd Austin as Secretary of Defense,” reads the letter, signed by Tuskegee Airmen Inc. President Jerry Burton. ” … General Austin is uniquely positioned to head the Department of Defense in the Biden-Harris Administration.”

Despite Lloyd’s potentially historic confirmation and four decades worth of experience in the U.S. Army — which includes serving as the first Black Commander of the U.S. Central Command and vice chief of staff of the U.S. Army — a number of Senate Democrats have said they would be unwilling to make an exception for Lloyd over a law intended to preserve civilian control of the military.

That law in question requires that the head of the Pentagon be at least seven years removed from the military, as theGrio previously reported. The present opposition from Senators like Sen. Elizabeth Warren and Sen. Richard Blumenthal is largely due to the Senate waiving the rule just four years ago for President Donald Trump to confirm former Defense Secretary Gen. Jim Mattis.

Read More: Elizabeth Warren will not vote for waiver for Biden’s Defense nominee

But in their letter to President-elect Biden, Tuskegee Airmen Inc. argues that Gen. Lloyd Austin is not only the right man for the job, but uniquely positioned to make historic changes to the Department of Defense and address the longstanding challenges facing service members of color.

“Though President Truman integrated the armed forces in 1948, systemic racial disparities in the armed forces persist. According to a recent New York Times report, only two of the top 41 military commanders are Black despite 43 percent of the men and women on active duty being people of color,” the letter points out.

“In addition, government reports show that Blacks are more likely to be the subject of a military investigation or court martial proceeding than their white counterparts. As the first Black Defense Secretary, General Austin would be well-positioned to address the stark disparities facing the men and women of color in the armed forces.”

The letter also notes that President Barack Obama, the nation’s first Black commander-in-chief, touted Gen. Austin’s “character and competence,” as well as his judgment and leadership. “These are exactly the qualities needed to lead the Defense Department at a time when restoring confidence in American global leadership is a priority,” the letter states.

During a Wednesday event to formally nominate Austin as his Defense Secretary, President-elect Biden sought to lobby the Senate to waive the seven-year retirement rule. “I would not be asking for this exception if I did not believe this moment in our history didn’t call for it — it does call for it — and if I didn’t have the faith I have in Lloyd Austin to ask for it,” Biden said.

Gen. Loyd Austin, for his part, expressed pride and gratitude for the opportunity to not only make history but to lead the very service he’s given more than half of his life to.

“If confirmed by the United States Senate, it will be my sincere honor and privilege to return to the department and lead our great service members and civilians in accomplishing our mission of ensuring our nation’s security,” said Austin.

“Back in 1877, a young man from the small town of Thomasville, Georgia, Henry Ossian Flipper, became the first African American to graduate from the United States Military Academy at West Point.

“After his commissioning, he was assigned to one of the Army’s all-black regiments, and he became the first non-white officer to lead the Buffalo Soldiers of the 10th Cavalry. Fast forward to today, nearly 150 years later, and another native son of Thomasville, Georgia stands before you as the Secretary of Defense-designate.”

In his address, Austin also paid tribute to the Tuskegee Airmen, adding, “Many people have paved the way for me and countless others over the years, including Henry O. Flipper. And I am supremely grateful to all of them for their courage, determination, and example. They include the Tuskegee Airmen, the Montford Point Marines, and many others.”