The U.S. has a shortage of around 7 million affordable housing units for renters whose household incomes fall below the poverty line, according to the National Low Income Housing Coalition. As Americans struggle to find affordable housing, homelessness is on the rise across the country. On any given night, more than 560,000 Americans find themselves homeless, per a 2019 point-in-time count. While many stay in shelters intermittently, people experiencing homelessness often find the gap from temporary to permanent housing to be too wide to jump. This leads to a vicious cycle and multiple returns to shelters.

This scenario becomes even more dangerous in light of the COVID-19 pandemic. Those facing homelessness already experience infectious diseases at higher rates than the general population, research from Johns Hopkins University reveals. “This should give government officials and health providers cause for concern” with regards to the coronavirus, observed Michael Cousineau, a University of Southern California professor of clinical preventive medicine. As governments seek to slow the spread, providing safe housing options will be critical. 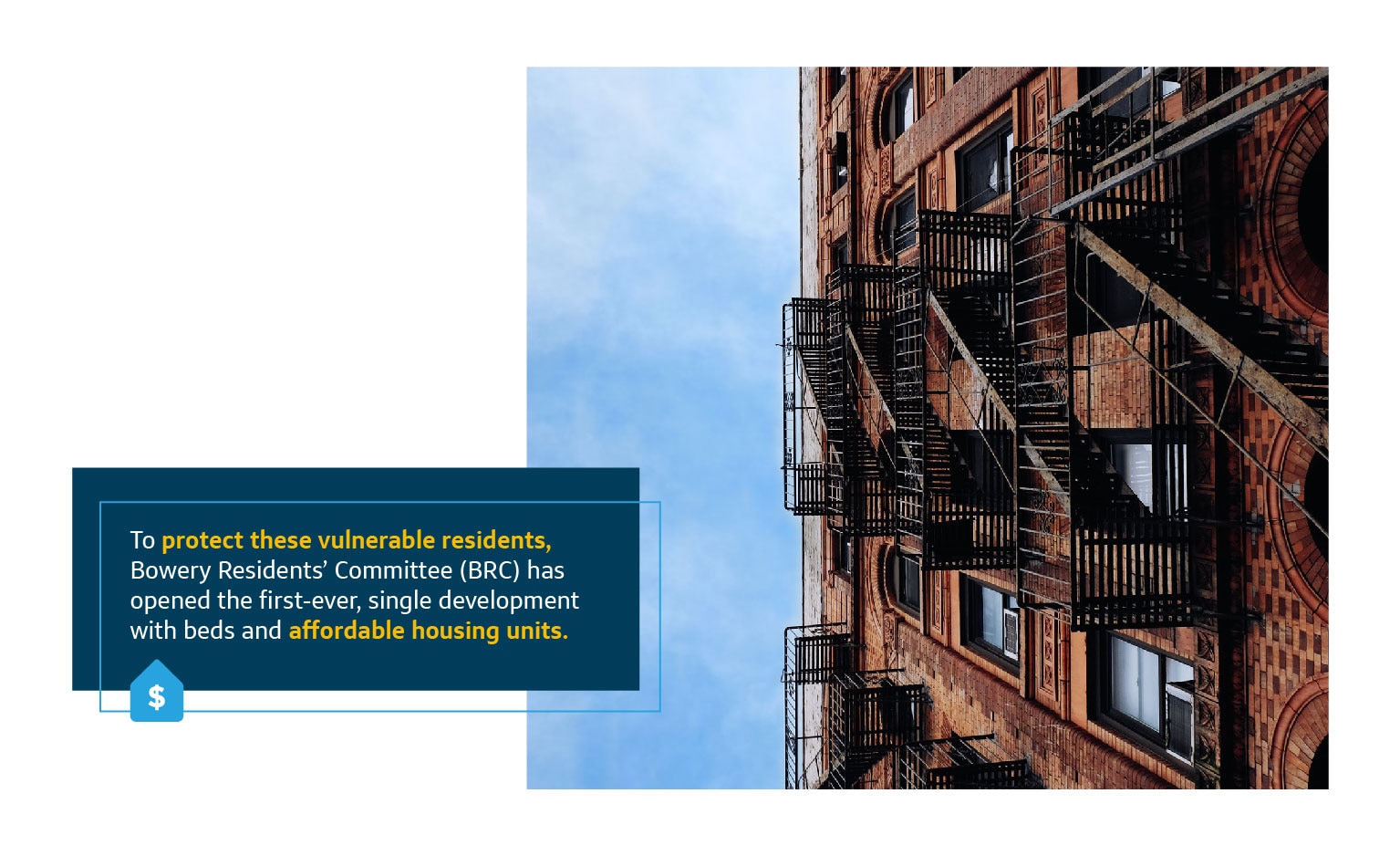 Bowery Residents’ Committee (BRC), one of New York City’s leading nonprofit organizations providing housing and services to thousands of vulnerable residents, has had a firsthand view of the challenges homeless populations face in attaining safe and stable housing. In response, it developed a new kind of solution to supply more shelter beds for New Yorkers experiencing homelessness and more affordable housing units for low-income renters: In 2018, BRC and a group of partners opened a single development which includes a shelter with 200 beds as well as 135 affordable housing units, the first combined development of its kind in the country.

“It’s been a success,” Muzzy Rosenblatt, BRC’s president and CEO, says of the Reaching New Heights transitional housing shelter and the Apartments at Landing Road affordable housing development in the Bronx. Among the indicators the development is having an impact on New Yorkers in need, Reaching New Heights “has among the lowest rates of absence without leave in the shelter system,” he adds.

For BRC, with decades of experience as a nonprofit in New York City, shifting to the role of owner and operator of a building was a big change. Traditionally, the organization runs shelters, rents space in existing buildings, and helps low-income residents pay rent. What drove the change was the realization that it could make a greater impact with the same budget by reducing the amount it paid in rent to landlords.

“We were always looking at our finances,” Rosenblatt explains. “We wanted to make sure for every dollar we spend, we get maximum value.” He and his team noticed that rent was BRC’s second largest expense, after labor, and figured that if they could reduce that, the organization could serve more people. 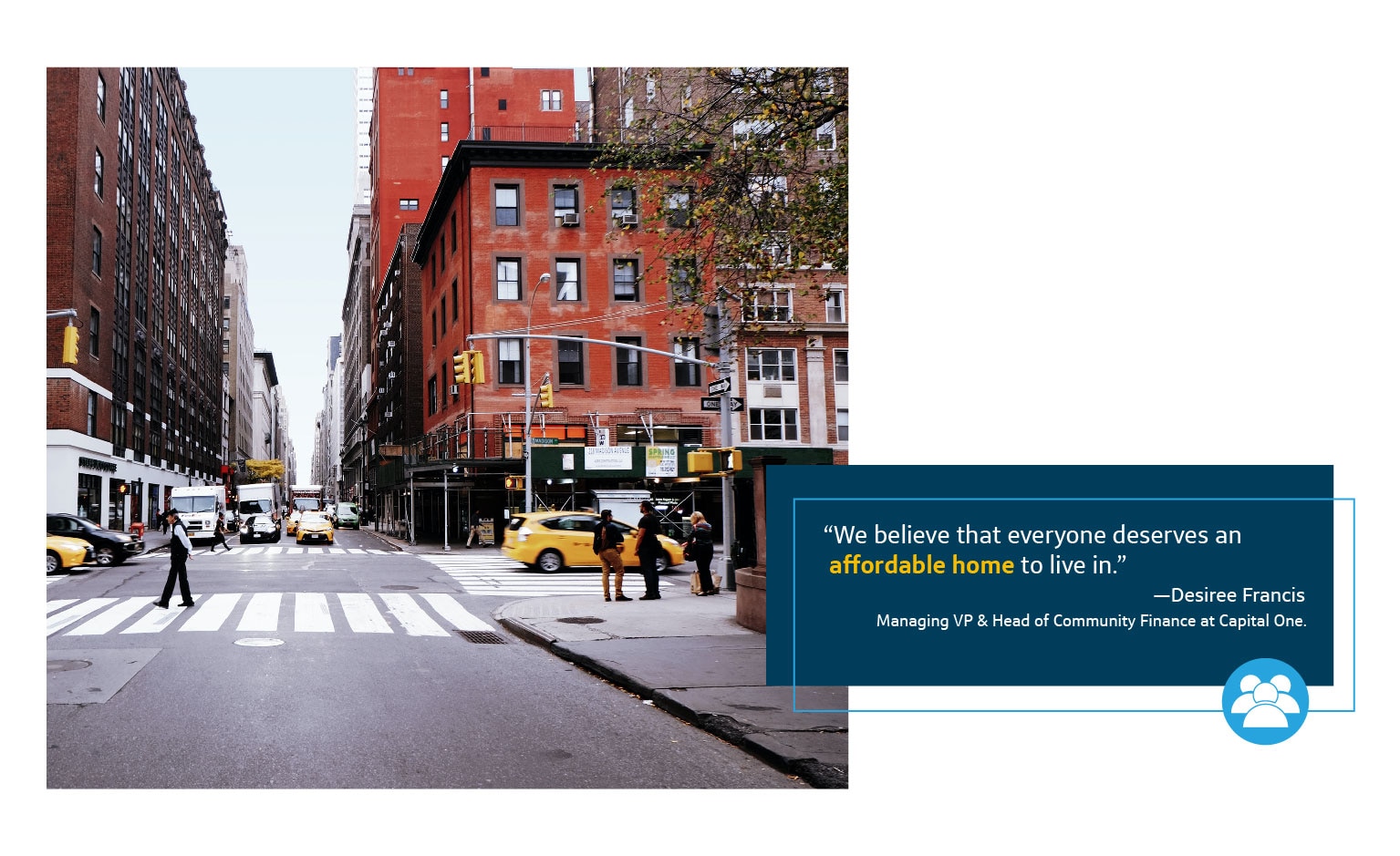 Still, BRC does not have an endowment or other capital funds it could use to finance an initiative like Reaching New Heights and the Apartments at Landing Road. It needed partners from across the nonprofit, government and private sectors, and found one in Capital One.

This unique initiative is just one of many that the financial institution invests in through its Community Finance team. “We believe that everyone deserves an affordable home to live in,” says Desiree Francis, Managing Vice President and Head of the Community Finance team. “Homelessness is such a major issue in the markets and cities where we live and work.”

BRC’s combined shelter and housing model caught the attention of Francis and her team. “One of the things that struck a chord with me was that there were two things happening that would provide benefits,” Francis says. “We know that there is a need for more shelter space and we know that individuals who make minimum wage are often priced out of affordable housing, and in this development, we had both of those being covered.”

Capital One brought financial expertise to the partnership, which proved valuable for an initiative that had never been done before. In addition to putting shelter beds and affordable housing under the same roof, BRC leveraged multiple funding streams from the city and federal government, as well as private partners, to bring the development to fruition. The model it developed is simple in theory but complicated in practice. New York City funds BRC’s Reaching New Heights shelter at the same rate, and with the same funding, that it uses to support all organizations operating shelters. However, while a private property developer might profit from the rent paid by the city to lease shelter space, BRC reinvests any surplus into subsidies for extremely low-income housing at the Apartments at Landing Road. BRC has recaptured $400,000 of shelter surplus and reinvested it in extremely low-income housing.

For Capital One, the qualitative impact of affordable housing investments are meaningful — it backs over 10,000 units a year — but it’s also the personal stories that matter to Francis. “For me, one of the things that I find most rewarding is when the properties are open and you can hear the stories of the residents, and how having access to affordable housing has transformed their lives and opened up opportunities in other areas,” she says.. “Housing is a foundation to build upon.”

Chances are that affordable housing will become an even bigger issue as the U.S. recovers from the ongoing novel coronavirus pandemic and the corresponding economic impacts, Rosenblatt says. He believes we’ll need more shelters and affordable housing units and hopes this model pioneered by BRC can scale and adapt to other situations around the country.

“We’re going to need to find vehicles and ways to house people in the months and years ahead,” he says. “We now have a model that Capital One and others can replicate and make an impact in a way that our country needs.”

This doesn’t have to mean putting shelters and housing together every time, he explained: Similar developments could add affordable residential units to buildings that house public schools, local health centers or other community resources, which can serve to subsidize housing prices.

As we move forward into an uncharted economic and social future, innovative solutions will be more necessary than ever to ensure we don’t leave the most vulnerable in society behind. BRC and Capital One found a way to improve the lives of hundreds — and created a model that gives organizations everywhere an opportunity to do even more.

Capital One is on a mission to change banking for good. To be authentic and impactful, our goals for our customers, associates and our communities must be clearly linked. Our 2019-2020 Corporate Social Responsibility Report illustrates this commitment. Learn more about Capital One’s commitments, here.