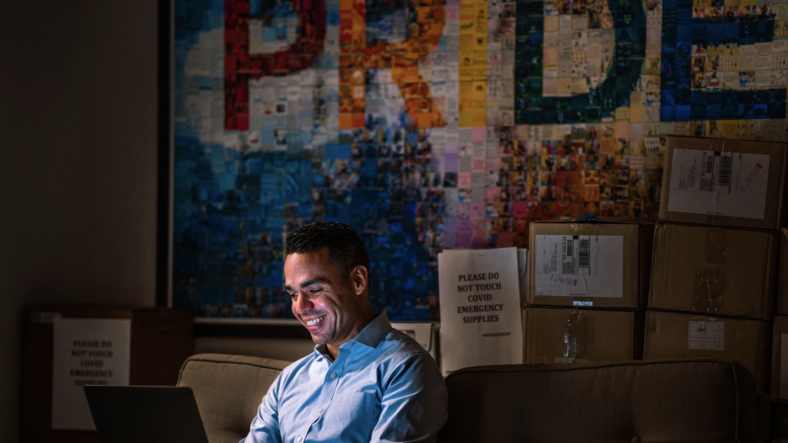 The COVID-19 pandemic forced the world to stay home. But for the LGBTQ+ youth community, the definition of “home” was unclear. Many did not have a safe home to return to due to familial rejection from homophobia and/or transphobia. This issue was further amplified with the spread of COVID-19, triggering many again of this painful trauma.

Due to their identity, many LGBTQ+ youth are kicked out of their homes or suffer from physical and mental abuse from families. According to statistics, they are eight times more likely to be homeless than non-LGBTQ youth. In fact, in New York City alone, studies have found that LGBTQ+ youth comprise up to 40% of the homeless youth population.

Headquartered in New York, the Ali Forney Center, is on a mission to protect LGBTQ+ youth from the harms of homelessness, while also empowering them with the necessary tools to live independently. They are the nation’s largest and most comprehensive organization dedicated to housing and caring for homeless, lesbian, gay, bisexual, and transgender young people.

Ali Forney Center was created in honor of Ali Forney, a young, Black non-confirming youth, who was forced to live on the streets at the age of 13. Ali took pride in helping others like him, advocating and fighting for justice at the series of murders of other homeless, queer youth. With the rise of the racial justice movement during COVID-19, Forney’s legacy is more important and pronounced than ever.

The Ali Forney Center’s Drop-In Center, located in Harlem, is its central intake location where any lesbian, gay, bisexual, transgender, or questioning youth can access food, medical care, mental health services, education, job training and more. It’s become the nation’s first 24-hour Drop-In program for homeless LGBTQ+ youth. The Drop-In Center is a beacon of hope for homeless LGBTQ+ youth, allowing them to escape the streets for a safe and warm environment. Here, they can form a community of like-minded young people who are experiencing similar struggles and joys.

Alex Roque, President and Executive Director of the Ali Forney Center, empathizes with the youth he works with every day because he was once there, too. “I’ve spent my entire life working for the community that I’ve been a part of,” says Roque. When Roque joined the Ali Forney Center in 2011, the Drop-In Center was open from 9 a.m. – 5 p.m., Monday through Friday. Roque pushed the center to be open 24-hours a day, seven days a week – no matter what. This was necessary to fill big gaps of time where at-risk youth are without critical care. Since then, the organization has grown to be the nation’s largest provider for 4,000 homeless youth.

But as COVID-19 peaked, many LGBTQ+ youths were being left behind and rejected from their families and homes. They had nowhere to go. So, Roque made a tough call to stay open, even during the peak of the pandemic. “The order was stay-at-home and be safe with your family. But, if you don’t have a family or home, you are reminded of that. I thought that parents might put their homophobia and transphobia behind them during this time. It’s actually re-traumatizing for these youth to be reminded of what they’ve been denied, just because of their identity,” says Roque.

Roque and the rest of the Ali Forney Center staff rallied together to ensure that every single one of their housing sites were properly stocked, from extensive sanitation to food. They have also created an Amazon wishlist for all 18 housing sites, introduced family dinner nights, and ramped up their virtual medical and mental health services. The Ali Forney Center Mobile Outreach program has also ramped up its efforts, providing and delivering supplies to LGBTQ+ homeless youth throughout the five New York City boroughs.

However, the choice to stay open was not easy. “It wasn’t a snap decision. Our Drop-In Center has always been 24/7 for the past few years. We didn’t want to close. We have a commitment to our young people,” says Stacey Lewis, Senior Director of Transitional Living at the Ali Forney Center. Lewis leads the Transitional Living Program (TLP), where they make sure young people have access to vocational services, learn professional skills, and are equipped with the skill sets for self-sufficiency and independence.

Berlin Lewis and Derrick Cobb, both graduates of the Ali Forney Center and the TLP program, were recently honored at the organization’s virtual fundraising event. After receiving holistic support, their lives and career trajectories completely changed. Lewis is now one half of the music duo, Wewereborn, and an activist for transgender rights. “They’re the best of the best when it comes to LGBTQ+ homeless youth. Once I got in, everything just went up. I was able to transition while I was at Ali Forney. I just needed the right support to do it,” says Lewis. After graduating, Lewis went off to record her first album and is spearheading the movement for trans and gay artists. “I feel like as an LGBTQ+ person of color, a lot of times, we are seen as a comic relief. But, with our name, Wewereborn, we wanted to make people understand that they are humans. When you say the name, it’s inclusive.”

Cobb is also a prominent recording artist and was roommates with Lewis during their time at the Ali Forney Center. “Everyone has gone off to do great things. We all still support each other. That’s love. That’s family…I remember my first dance recital at Alvin Ailey. I didn’t have any guests come. But the entire Ali Forney Center staff showed up,” says Cobb.

At Capital One, we know our differences are what make us stronger – more innovative, more nimble, and more resilient. From our founding days, our highest calling has been to attract and empower our associates to do great work by creating an inclusive culture that values diverse perspectives, fosters collaboration and encourages innovative ideas that help people thrive. That’s why we are proud to support Ali Forney Center and its unwavering commitment to its youth. We are excited to see them grow the next generation of fearless leaders and storytellers.