Richard Barnett has since been arrested and charged with entering and remaining on restricting grounds, violent entry, and theft of public property 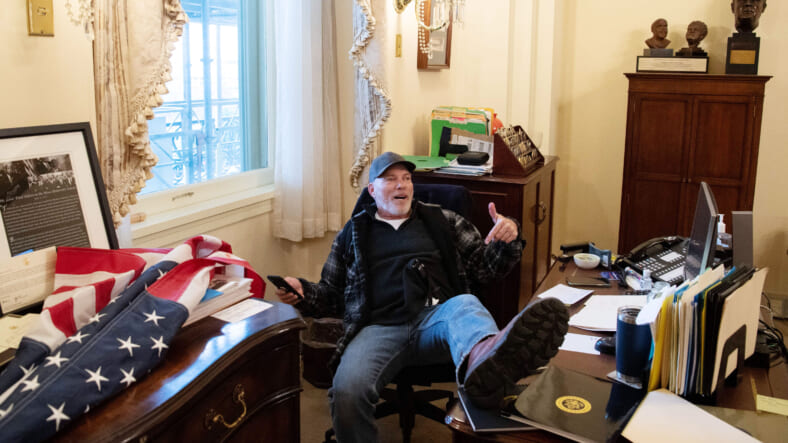 The man seen sitting at House Speaker Nancy Pelosi’s desk has been arrested and made interesting comments about his death on Facebook.

Richard Barnett of Gravette, Ark. has been identified as the man in the viral image that displays him kicking his feet up on the House Speaker’s desk during Wednesday’s Capitol riots. The self-described “nationalist” has been charged with three federal counts for raiding the government building.

Prior to joining the Donald Trump mob, he went on several Facebook rants, including talks on his death, per, The Washington Post.

Barnett used Facebook under different pseudonyms on the social media site, and it appears they have all been deactivated by the company. Sources say he also went by the name “George Reincarnated Patton” which was the name of a World War II general.

In one post, he wrote, “Came into this world kicking and screaming, covered in someone else’s blood,” then adds, “I’m not afraid to go out the same way.” In another post, he announced he would attend the pro-Trump rally on Dec 28.

“This is OUR COUNTRY!!!” typed Barnett. “Can you give one day from the Internet or work or whatever to be active, get the f— up people. Please STAND!!! If not now, when?”

The 60-year-old thug also goes by the name “Bigo” and is a known Pelosi critic. He displayed frustration that she described the term “white nationalist” as derogatory.

“I am white. There is no denying that. I am a nationalist. I put my nation first. So that makes me a white nationalist,” Barnett wrote, then added, “get the f— out of our nation.”

According to reports, he was arrested on January 8.

“NEWS: Richard Barnett, who was seen sitting at a desk in Speaker Pelosi’s office, has been arrested in Arkansas and charged with entering and remaining on restricting grounds, violent entry, and theft of public property.” wrote Geoff Bennett to Twitter.