The group of demonstrators is seen marching in the New York streets, chanting 'Protect Black Women!' 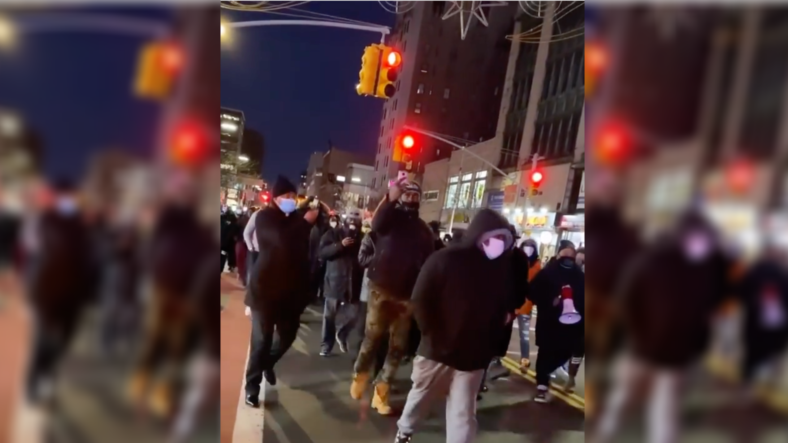 Several members of the Harlem community in New York City rallied on Saturday in support of a Black woman who was attacked outside of a liquor store on Jan. 18.

The 31-year-old woman, who wishes to remain anonymous, had entered a Harlem liquor store to make a purchase when three young men asked her to retrieve liquor for them, according to ABC News. After politely declining to do so, she was followed and subsequently attacked right outside of the store.

A surveillance camera captured the attack. The woman says she was punched, kicked and her face was bitten. “I was mauled, this is more than being bitten,” she said.

The police are still investigating the incident and in search for all three suspects.

The Harlem community has responded to the woman’s attack. On Saturday, a group of residents took to the Harlem streets in protest. Video of the demonstration was captured and posted on social media. In one Instagram post by Rachel Noerdlinger, the group of demonstrators is seen marching in the New York streets, chanting “Protect Black Women!”

CBS News reports that several of the protesters gathered outside of the liquor store where the woman was attacked. Among the protesters was the activist group, SAVE (Stand Against Violence East Harlem), urging the people to protect women in the neighborhood.

“If we don’t do it, who [will],” said SAVE Director Omar Jackson. “It’s our responsibility, it’s our duty to protect our women and children in our community.”

One community advocate, Tony Herbert, is offering a cash reward for anyone who can provide information that will lead to the capture of the three attackers. “What took place here is atrocious,” Herbert told NBC New York. “To assault a sister like this is an insult and a direct attack on every woman in our city.”