EXCLUSIVE: The impact of climate change is felt by all across the country, but the most vulnerable to it are people of color 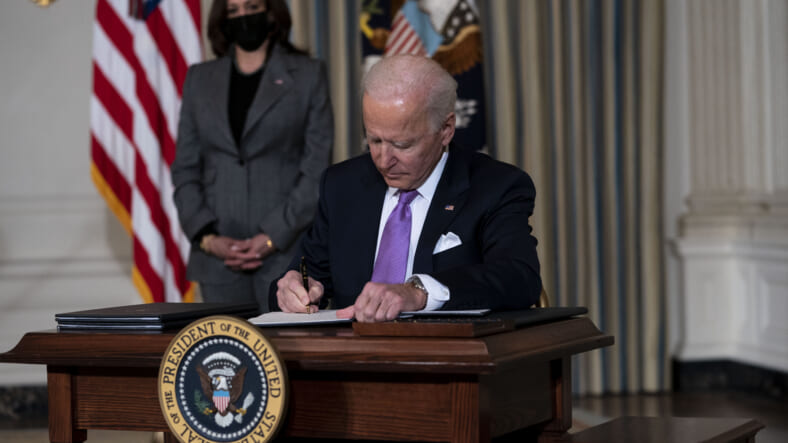 The climate crisis was front and center Wednesday at the White House.

With the “all of government approach,” the Biden administration is issuing executive actions targeting the revitalization of the U.S. energy sector; conserving our natural resources and leveraging them to help drive our nation toward a clean energy future, creating well-paying jobs with the opportunity to join a union, and delivering justice for communities who have been subjected to environmental harm.

On his first day in office, President Joe Biden rejoined the Paris climate accord and began a review of rollbacks on standards that protect our air, water and communities.

Read More: On Day One, Biden to undo Trump policies on climate, virus

The impact of climate change is felt by all across the country, but the most vulnerable to it are people of color. U.S. Congresswoman Eddie Bernice Johnson, who hails from Dallas, Texas, sits on the House Committee on Science, Space, and Technology.

“Right now it is clear that the most vulnerable people to this pandemic [and] suffering are people of color … what puts them there is where they live, what’s available and what’s not available,” Johnson tells theGrio. “We live near the dumping grounds are. We live where there are food deserts [and] where we don’t have access to fresh vegetables.”

Johnson also noted the ways in which living in a zip code with poor air quality affects the health and overall well-being of Black and Brown communities.

“We live where we don’t have adequate transportation. So we have to ride public transportation when we have access to it. And so all of the things that make us vulnerable … of high blood pressure, diabetes from poor diets … all of that must be addressed and we’ve had hearings on environmental justice and great hearings from people all over the country,” said the congresswoman.

“We know what effect it has. We passed a [bipartisan] bill from my committee [in] the House. Nothing happened in the Senate. I will say, however, that we had 16 bills that dealt with the environment that did get in the last bill … that started out as the Heroes [Act] that dealt with the research to [address] with energy,” Johnson adds.

“We will continue that because we worked very hard to galvanize this committee that has the lion’s share of research responsibility that undergirds policy.”

Read More: A 5-point plan to addressing climate change and protecting the planet

Hurricane Katrina is one of the most recognized examples of the impact of climate on minority communities. Residents of the ninth ward, who lived right next to the levy, were flooded as well as those in surrounding communities. The devastating impact of the storm caused the levy system to burst, resulting in the loss of over 1,800 lives, jobs, homes and businesses.

Natalie Mebane, associate director of U.S. policy at 350.org, tells theGrio that “racism is one of the main things that fuels the climate crisis.”

“You would not have the climate crisis without racism because you always have to sacrifice some in order to have fossil fuel and people know who and where those sacrifices are going to be,” Mebane said.

“You can’t have climate change without sacrifice and you don’t have sacrifice without racism. So, honestly, racism is one of the key factors that created the climate crisis.”

Mebane believes the impact of climate change is not hitting people hard enough for larger swaths of the American public to pay attention to what’s happening right before their eyes.

“I think we’re not taking the crisis seriously at all,” says Mebane. “I think that if people really understood the science of that, we are literally fighting to keep human civilization.”