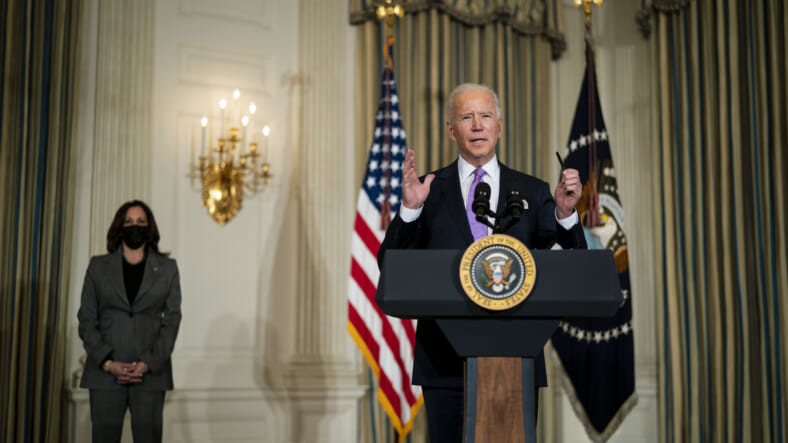 U.S. President Joe Biden speaks about his racial equity agenda in the State Dining Room of the White House on January 26, 2021 in Washington, DC. (Photo by Doug Mills-Pool/Getty Images)

Despite many hiccups — including an insurrection on the United States Capitol — Joe Biden and Kamala Harris have finally made it to the White House and many are relieved. From the first 100 days to the next 4 years, the nation’s to-do list has a lot of repairing and reinstating to do.

This week on the Dear Culture Podcast, hosts Shana Pinnock and Gerren Keith Gaynor dish on the expectations, wishes, and demands required from the new Democratic administration.

Pinnock and Gaynor also teamed with theGrio’s White House correspondent and DC Bureau Chief, April Ryan, to share her experiences covering the Trump administration and discuss her outlook for the Biden-Harris administration.

This week, we’re asking: “Dear Culture, how do we plan to hold the Biden-Harris administration accountable during its first 100 days?”

“I want to see from this administration white people actually suffering from consequence for their bad deeds. No the Capitol rioters do not get a reprieve, Donald Trump doesn’t get reprieve. We saw what they tried to do,” says Pinnock.

This country and its citizens are baffling to watch for Pinnock, theGrio’s social media director. From being repeatedly told to quarantine and flatten the curve to the former administration’s handle on the pandemic, our country specifically doesn’t know how to get it together.

Gaynor, theGrio‘s managing editor, reminds us that “it’s important that we sit tight and calm down” and remember that once this is over, we can return to celebrating our birthdays and crunching. But the nationwide short-sightedness has our hosts wondering if the pandemic will continue through 2022.

“President Biden should have, or is about to, assign a series of orders that address racial equity,” says Gaynor.

Though vague, so far the Biden administration is calling upon many agencies to “advance equity.” But Gaynor reminds us that even if Biden writes a few executive orders to make a small impact, what matters is getting Republican Party members of Congress to vote on equitable legislations, which isn’t an easy feat politically.

Ryan notes that her 4th administration was deeply traumatic. Normally when one asks questions to the leader of the free world, there are answers. However, in Ryan’s predicament, everyone watched as she, a Black woman, was chastised by Trump for doing her job.

Now that there’s an administrative change, though the work is not done, she says she is breathing better.