EXCLUSIVE: Harrison, who previously ran for the U.S. Senate in South Carolina, says Republicans have no choice but to convict Donald Trump for the Jan. 6 Capitol insurrection 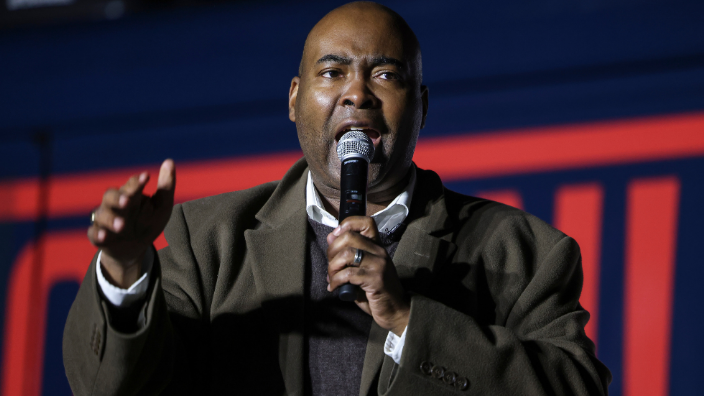 Jaime Harrison speaks to supporters at a drive-in rally at the Orangeburg County Fairgrounds on November 2, 2020 in Orangeburg, South Carolina. (Photo by Michael Ciaglo/Getty Images)

On Capitol Hill, on the Senate floor, the second impeachment of Donald Trump was underway today following a day of debate on the issue Tuesday.

During the Wednesday much-watched event, House impeachment managers continued to use the president’s words and actions against him to support their claim for a conviction against Trump in the U.S. Senate for inciting an insurrection.

Democrats are laying out their case with compelling videos and law enforcement evidence and confessions as Republicans are expected to acquit Trump of any wrongdoing.

Democrats offered stunning documentation from a member of the Proud Boys saying the extremist group would kill then-Vice President Mike Pence if given the chance. Video footage was also displayed of insurrectionists saying that they had followed what then-President Trump told them to do.

Jaime Harrison, the new Democratic National Committee chairman, said he can’t understand how there are questions from Republican senators about whether or not they should convict Trump.

“You’ve got members of the United States Senate who were right there, and they heard the threats on the lives of the vice president and the speaker of the House, and they’re willing to turn a blind eye to that and not hold anybody accountable,” Harrison told theGrio.

“There’s something fundamentally wrong with that, and there’s a cancer eating in our democracy right now, and we got to figure out how we cure it.”

The trial is dominating cable news and networks with so many stories of how Trump incited the Jan. 6 Capitol attacks to emphasize Trump’s attempt at cheating the election by way of Georgia, which voted Blue for the first time in nearly 30 years.

House managers recalled that Trump referred to the Georgia Secretary of State Brad Raffensperger as an “enemy of the people.”

Black voters elected Biden for the presidential win in states like Pennsylvania, Michigan, and Georgia. Trump was laser-focused on those three states with claims of voter fraud. Sixty lawsuits based on the Trump claim were denied.

Also, the presidential campaign was brought into the impeachment conversations on the Senate floor.

Congresswoman Stacey Plaskett brought up Trump’s words from the first U.S. presidential debate between him and Biden, in which he told Proud Boys and other white nationalist groups to “stand back and stand by” when asked by debate moderator Chris Wallace if he would condemn racist violence.

On Trump’s actions, Plaskett said the former president must be convicted and “disqualified.”

Chairman Jaime Harrison said of the first day of the impeachment debate Tuesday, “I watched the video that they released; a 13-minute video which recaps the mob that attacked our capital on January 6. And I cried because it shook me again to my core that in America, we allowed that to happen, that this happened to our capital, a place where I worked, where my colleagues, my former colleagues had to barricade themselves into their offices, hiding on the desk, shaping weapons out of pins and scissors because they were afraid that they were going to die.”

Harrison strongly affirms the acquittal of Donald Trump sets a terrible precedent for this deadly security breach of the Capitol. It is still inconceivable for Harrison, “To think what happened, happened, and it was the president of the United States that poured gasoline on the fire to make it happen.”

The question that still looms, is if the evidence and case against Trump are strong enough for Republicans to convict Donald Trump, or will they acquit him as he could be a potent GOP asset in the 2022 election cycle?