OPINION: Use of the antiquated Ku Klux Klan Act of 1871 reminds America that we have been down this divisive and violent past before 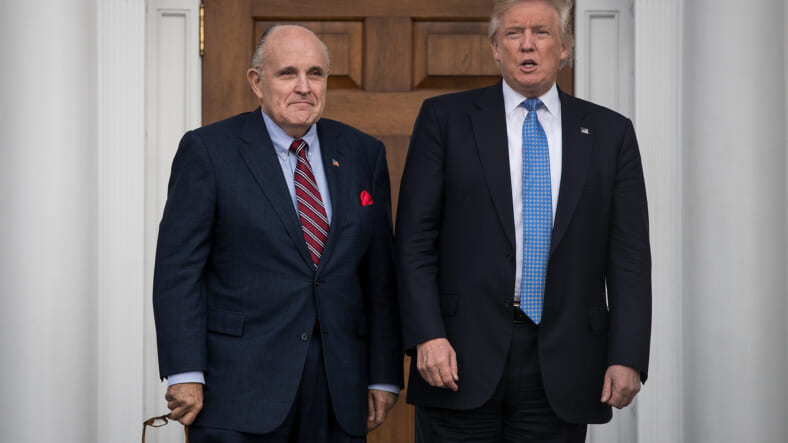 House Homeland Security Committee Chairman Rep. Bennie Thompson of Mississippi and the NAACP are playing no games, and they are naming names.

On Tuesday, the historic civil rights group filed a federal lawsuit against former President Donald Trump and his faithful minion, former New York Mayor Rudy Giuliani. The suit was filed on behalf of and in concert with Congressman Thompson.

In a statement, Thompson said, “While the majority of Republicans in the Senate abdicated their responsibility to hold the president accountable, we must hold him accountable for the insurrection that he so blatantly planned.

“Failure to do so will only invite this type of authoritarianism for the anti-democratic forces on the far right that are so intent on destroying our country.”

The lawsuit alleges that the Jan. 6 insurrection at the U.S. Capitol was in violation of an antiquated (yet important) statute known as The Ku Klux Klan Act of 1871.

In short, this statute includes protections against violent conspiracies (like the one Trump and his sycophants hatched after the 2020 election falsely claiming that he won and that it was stolen from him) that interfere with Congress’s constitutional duties.

In this case, that duty was to certify a national election in declaring Joe Biden as the winner of the presidential Electoral College.

The suit also names the Proud Boys, the far-right nationalist group, and the Oath Keepers militia group. The legal action accuses Trump, Giuliani and the two groups of having conspired to incite a violent riot at the Capitol, with the goal of preventing Congress from certifying the election.

Why does this matter?

It matters a lot. If the U.S. Senate refuses to do its duty to hold the co-equal branch (in this case the executive) accountable for “high crimes and misdemeanors” then once again Black patriots must step up as it is our communities that will be severely impacted by any future acts of white domestic terrorism, lynchings or mob violence.

More importantly, Republican lawmakers and legislators have already started putting together voting restrictions in key states like Georgia, where Black votes made the difference for Biden and the U.S. Senate.

At the time when this 150-year-old law was passed, it was intended to protect Black people, newly freed from slavery and members of Congress (in that day the “Radical Republicans”) from being terrorized by the KKK.

The KKK had particularly been known to use threats, assaults and destruction to influence elections and intimidate white Republicans (how ironic is that) who were attempting to participate in the new Congress. The domestic terrorist group (one of the first of its kind here in America) also sought to reverse and block Reconstruction-era activities in the South that would give Black men political power, economic and educational rights.

The federal statute was passed after the Civil War to combat violence by the KKK and allow civil action to be taken against people who use “force, intimidation, or threat” to prevent anyone from upholding the duties of their office.

What Chairman Thompson and the NAACP, as well as others, are attempting to do is bring the argument full circle; that Trump and his minions did engage in post-Civil War like tactics of sedition, insurrection, intimidation and violence resulting in death. Not to mention, they did it at the epicenter of our democracy: the United States Capitol.

The statute has been used in the recent past (at least three times). Another lawsuit filed against Trump in 2020 alleged that he violated “the KKK act” when he attempted to overturn the election results of majority Black and Brown cities and communities.

The NAACP Legal Defense and Educational Fund filed that lawsuit in November, accusing Trump of disenfranchising voters of color by trying to “slow and stop vote counting efforts in tightly contested states.”

Another suit that was filed last year by the National Coalition on Black Civic Participation alleged wrongdoing against right-wing political operatives Jack Burkman and Jacob Wohl for allegedly violating the KKK act when they “conspired to intimidate and threaten many thousands of eligible voters.”

More specifically, Burkman and Wohl were accused of targeting Black voters in 85,000 robocalls that spread false information about voting by mail.

The statute was also cited last year in a lawsuit filed by St. Louis Circuit Attorney Kimberly M. Gardner that claimed a police union used a racially-motivated conspiracy against her.

Gardner, a Black woman, said the police union harassed and intimidated her and city officials in an attempt to silence her and remove her from office. The lawsuit, which was ultimately dismissed, alleged that these were attempts to block her reform efforts.

What the NAACP and Chairman Thompson are doing is powerful. They are using antiquated laws on the books that have not had to be used in over a century to remind America that we have been down this divisive and violent past before.

That domestic terrorism, white mobs, shady politicians have tried to undermine democracy before. And that the only way “we the people” win is when we hold them to account. And make them pay for their un-American practices.