Trump turns down meeting with Gaetz amid investigation: report

'My family and I have been victims of an organized criminal extortion involving a former DOJ official,' the embattled Gaetz said in a statement.

Florida Rep. Matt Gaetz has reportedly been denied a meeting with former President Donald Trump amid a sex trafficking probe that has shrouded his political career.

The Republican congressman, a staunch supporter and close friend of Trump, believes the former commander-in-chief should run for office again in 2024. But now, it seems Trump can’t be bothered taking his calls, as Gaetz had reportedly hoped to meet with Trump at his Mar-a-Lago club in Florida. Per CNN, he was turned down by close aides to the reality TV star-turned-global leader.

Gaetz has since fired back at the report, calling the story “a total lie” and saying, “No such meeting was denied nor sought.” His spokesman, Harlan Hill, also confirmed with The Hill that Gaetz had not requested to meet with Trump.

“Rep. Gaetz arrived at Doral, gave a speech, and left. He has not solicited a meeting with President Trump anytime recently, as confirmed by President Trump’s own team in a public statement today,” said Hill. “Rep. Gaetz has been spending his time in recess relaxing with his fiancee, and appreciates all the support he has been receiving from his constituents — who in a poll last week demonstrated overwhelming support for the Congressman — as well groups like Women for America First who hosted him in Miami this weekend.”

The report comes after Trump defended the embattled congressman following a report from The New York Times that said Gaetz asked for “blanket pre-emptive pardons for himself and unidentified congressional allies for any crimes they may have committed.” The publication cited two unidentified people with knowledge of the discussions.

“Congressman Matt Gaetz has never asked me for a pardon. It must also be remembered that he has totally denied the accusations against him,” Trump said in the Wednesday statement.

As theGRIO previously reported, Gaetz is under investigation by the Department of Justice investigation over an alleged sexual relationship with a 17-year-old girl, who he reportedly paid to travel with him across state lines, a violation of federal sex trafficking laws.

The New York Times reported that the probe is part of a broader investigation into Joel Greenberg, a Florida tax collector and Gaetz ally who was charged last year with 14 felony counts, including sex trafficking of a minor. The publication cited three who were briefed on the probe. Insiders also claim Gaetz used to brag to colleagues about his sexual escapades. He’s said to have even showed fellow lawmakers nude photos and videos of the women he had sex with kept stored on his cell phone.

“It was a point of pride,” one source said of Gaetz to CNN.

It’s unclear if these pictures are connected to the DOJ investigation. According to the Times report, the Justice Department began investigating Gaetz during the final months of Trump’s presidency under former Attorney General William Barr.

Gaetz asserted to Axios that he is the subject, not the target, of “an investigation regarding sexual conduct with women.” He added: “The allegations against me are as searing as they are false. I believe that there are people at the Department of Justice who are trying to criminalize my sexual conduct, you know, when I was a single guy.”

The Florida congressman told The Times “I have a suspicion that someone is trying to recategorize my generosity to ex-girlfriends as something more untoward.”

Gaetz said he is “absolutely” sure none of the women he was entangled with were minors. No charges have been brought against him. Per MSN, Gaetz believes he is being threatened in a $25 million “organized criminal extortion” plot.

“Over the past several weeks my family and I have been victims of an organized criminal extortion involving a former DOJ official seeking $25 million while threatening to smear my name,” Gaetz said in a March 12 statement. “We have been cooperating with federal authorities in this matter and my father has even been wearing a wire at the FBI’s direction to catch these criminals.” 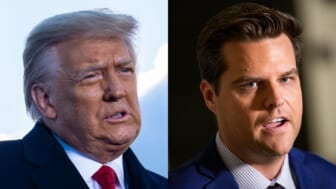