‘We can’t get salad in the Bronx?’: Dear Culture unpacks how the climate crisis affects Black Americans 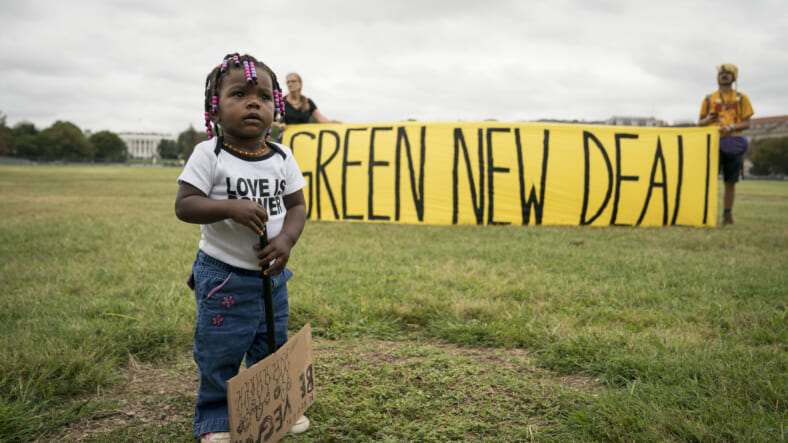 One-year-old Tatiana Llosa and other young environmental advocates participate in a strike to demand action be taken on climate change outside the White House on Sept. 13, 2019 in Washington, DC. (Photo by Sarah Silbiger/Getty Images)
Loading the player...

Without a shadow of doubt climate change is one of the largest crises of this century. However, notably absent from the conversation around climate change are the communities most impacted by it. This week on the Dear Culture podcast, hosts Shana Pinnock and Gerren Keith Gaynor ask: Should Black People Go Green?

In a report published in 2020, Princeton University said African Americans are 75 percent more likely than White people to live in areas near commercial facilities that produce noise, odor, traffic, or emissions that affect the population.

“If you think about the COVID-19 pandemic, why were Black and brown people dying at a higher rate than white people,” said Gaynor. “It’s not because our skin is Black necessarily, it’s because of pre-existing health conditions because of environmental injustice.”

The hosts also pointed out that the climate crisis not only affects the air we breathe, but the food we eat and have access to, with many residents in working-class Black and Brown communities being forced to travel outside of their neighborhoods to find healthy food.

“I know I see definite differences in my neighborhood than if I was to go outside of my neighborhood,” said Pinnock. Gaynor agreed, adding, “I grew up in Brooklyn and until recently—when White people with certain incomes starting moving into the neighborhood it was the same thing, you would have the corner bodega, the liquor store and the check cashing building, but very few—if any, access to fresh produce.”

The difficulty in finding healthier food options is compounded by inadequate access to transportation. In a conversation with theGrio‘s White House Correspondent April Ryan, U.S. Transportation Secretary Pete Buttigieg said racism is physically built into American infrastructure, citing the low-built bridges and overpasses in many urban areas that segregate communities of color from White communities.

However, the stereotype that Black communities are unconcerned with what’s happening to our planet is simply untrue says Gaynor. Noting that many African Americans are “inherently green” with deep connections to that land, which were severed when Black Americans in the rural south made the Great Migration to the urban centers of the north in hopes of creating a better life. Moreover, says Pinnock, the Black community is overwhelmed by the daily struggle of just trying to survive.

“Everything is wrong and we’re being attacked from all sides. So, if we’re not all gung-ho with our reusable bags, I’m gonna give Black people a pass. We have so much going on,” said Pinnock.

Despite the ways in which Black communities are excluded from larger, mainstream conversations about the impact of climate change, both Pinnock and Gaynor agree that taking care of the planet is a Black issue and we do, in fact, have a great deal of power that we can use to advocate for ourselves and each other. After all, Pinnock notes, it’s the only home we’ve got.