Decertify the Police: As states wrestle with police brutality, one solution was there all along 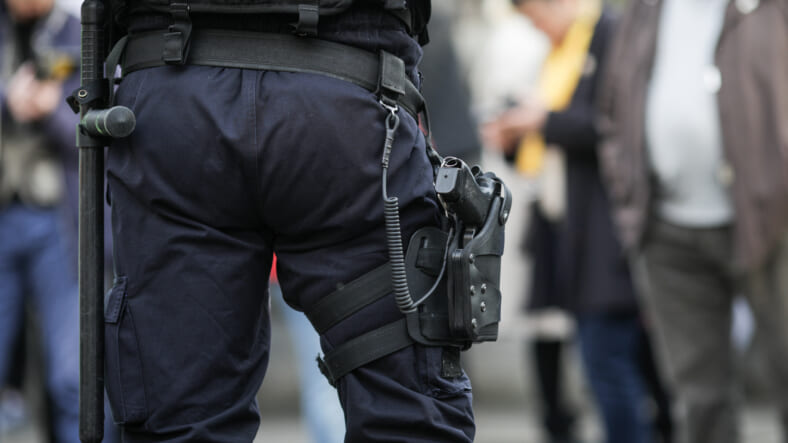 Details of the security kit of a riot police officer (including handcuffs, 9mm handgun, radio station and baton) sitting amongst civilians

Let’s play a game we all learned as kids: One of these things is not like the other. Here are three stories of professional misconduct, tell me which one is different.

In 2020, Dr. Clarence White, a well-respected psychologist in Syracuse, New York was found to have engaged in a sexual relationship with one of his clients. He was fired from his job at St. Lawrence Psychiatry Center but no charges were filed. In 2013, Todd Boldry, a teacher in Knox County, Indiana, who was investigated for “seduction of a minor” was fired from his teaching job, although charges against him were dropped.

And in 2019, New York cops Eddie Martins and Richard Hall were accused of raping a 17-year-old girl in their squad car. Despite copious DNA evidence, the officers were only charged with accepting bribes and misconduct, were allowed to resign, and only got 5 years probation.

Now all of these stories are terrible, and in each case, individuals violated trust, professionalism, and any semblance of decency related to their jobs. But which one is not like the others? Dr. Clarence White lost his medical license and Todd Boldry lost his teaching license — they will never work in their professions again.

The two New York cops? Unlike the others, they’re a resume scrub and a good Indeed.com profile away from getting another policing job and cruising a high school parking lot near you. In the battle for police reform, accountability and justice, Americans don’t have to re-invent the wheel. We just have to revoke the thing that allows you to get behind one: Licenses.

When Derek Chauvin was convicted of murdering George Floyd, millions of people across the world cheered, interpreting the ruling as a watershed moment in the quest to hold police accountable for indiscriminately killing Black people. I wasn’t one of those people.

I pointed out at the time that unless the Chauvin ruling was followed up by radical and pro-active changes to American policing, Chauvin’s conviction did nothing to prevent the next Black person from being shot whenever a cop was having a bad day. Within 45 minutes of the ruling, a Columbus, Ohio cop emptied four bullets into 16-year-old Ma’Khia Bryant outside of her home, and 24 hours later, Andrew Brown Jr. was fatally shot 5 times by white cops outside of Elizabeth City, North Carolina.

Read More: The foster care system and others failed Ma’Khia Bryant — and Black kids like her

The nation also learned that in addition to the prior 22 use-of-force complaints against former Officer Derek Chauvin, that he had kneeled on a 14-year-old boy’s neck back in 2017 and did not face any discipline for it. In other words, Chauvin should have been stopped years ago, instead, he was given free rein to get more violent over time doing who knows what before he was finally caught in the act by a cell phone camera.

While we know that the byzantine laws of every state and ridiculous union contracts make convicting and firing police officers almost impossible, if states would pro-actively revoke police licenses, bad cops would be off the streets before they can hurt anyone again.

How does this work? Just like any other profession. State governments offer licenses to practice a slew of occupations: lawyers, hairdressers, doctors, teachers, florists, heck even the Tiger King had a license to run his zoo. In fact, there are 44 states that require police to be licensed in order to work the streets as well. However, accountability for on-the-job performance is higher for a frog farmer, tattoo artist or school teacher than it is for a gun-toting police officer.

Also Read:
Decertify the Police: As states wrestle with police brutality, one solution was there all along

As for police officers? In most states, they can only lose their license if they’re convicted of a crime, and we all know how unlikely that is. Plus, in the rare instance of a conviction, you have the “wandering officer” problem where bad cops just jump from county to county and state to state, essentially becoming murderous Ronin with badges.

Now I know some conscious strippers, ethical tattoo artists and creative florists, but it seems to me that a police officer with the power to use lethal force should at least be held to the same standards as my barber. A close shave with one of them might cost me my life.

It would take years for activists and politicians to argue state by state to expand the criteria for revoking a police license, and quite frankly, we don’t have that kind of time. The best way to bring licenses into play for accountability is through the George Floyd Justice In Policing Act, which the Biden administration is touting.

The act bans chokeholds, ends qualified immunity and collects data on the use of force by police. These are all great ideas but none of them would have actually stopped Chauvin from murdering George Floyd. Our goal is to stop the wanton killing of Black people by police, not collecting the best data on murders after the fact. The act should include language that requires states to create police decertification boards that can discipline cops for behavior unbefitting an officer regardless of a court conviction.

These boards should be composed of former officers, activists and random citizens similar to a jury pool to ensure diversity. Further, the act should require that decertifications are recognized across state and county lines.

That prevents cops like Timothy Loehmann, who was booted out of the police in Independence, Ohio, from driving 15 minutes up the road, getting a job with the Cleveland Police Department and shooting 12-year-old Tamir Rice months later. Or Sean Sullivan, an Oregon police officer decertified for kissing a 10-year-old girl, who skipped town and got hired as a police chief in Kansas, where a few months later he was caught for assaulting a 14-year-old.

If the state of Minnesota had revoked Derek Chauvin’s license after his 4th, 5th, or even 10th complaint of excessive force, George Floyd would be alive today. If states balk at this change, their federal police funding should be cut, and nobody wants that.

De-licensing cops won’t stop every problem with American policing but it’s a start. The infrastructure is already in place, and Republican and Democratic state legislators have already looked into the idea. All they need is a little push.