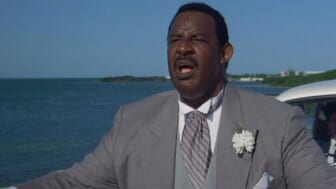 Character actor Frank McRae, best known for his roles in films like License to Kill and The Last Action Hero has passed away.

His daughter-in-law, Suzanne McRae, said the former NFL player was 80 when he died from a heart attack on April 29 in Santa Monica, per Yahoo News.

Hollywood took to Twitter to mourn the late actor.

“We are sorry to hear that Frank McRae, who played Sharkey in Licence To Kill, has passed away. Our thoughts are with his family and friends,” tweeted  the James Bond account.

“We’re saddened to learn about the passing of Frank McRae, who admirers know appeared in numerous Steven Spielberg and Amblin films including 1941, USED CARS, and in perhaps his most beloved role, as Harry Noble in Amblin Entertainment’s *BATTERIES NOT INCLUDED,” tweeted out Steven Spielberg’s film and television production company, Amblin.

Actor Eric Vespe also shared his condolences. “Frank McRae ruled. All-time character actor. It was always a delight seeing him pop up in movies. I especially love his delivery of “He treated me like a dog, Mr. Wally!” in Vacation. Also great in Used Cars and 48 Hrs. He will be missed.”

McRae was born and raised in Memphis, Tennessee. He attended Tennessee State University in Nashville where he was a double major in drama and history and excelled in sports. He started his pro career as a defensive tackle for the Chicago Bears and went on to play for the Los Angeles Rams.

But he also had a love for the arts. The 6’6 actor appeared in films such as  F.I.S.T. with Sylvester Stallone and in the 1989 James Bond film Licence to Kill, he appeared as Sharkey. In a career spanning over three decades, McRae appeared in 40 movies and TV shows, per WBRZ.

During an interview published in 2014 by The Actor’s Journey, McRae talked about the importance of being resilient and following your dreams.

“You have to keep dreaming that dream. You can’t say I’m going to learn all I can from high school and this is going to catapult me to being a big star,” said the actor.

The actor is survived by his grandchildren, Camden, Jensen and Holden and by his son, Marcellus.

Per Variety, “Donations in his memory can be made to Sheldrick Wildlife Trust, an orphan elephant rescue and wildlife rehabilitation program in Kenya.”

The actor concluded the interview by saying, “But constantly keep knocking on the door and one day you will be able to hit the door and knock it down. But when you walk in you must be ready be prepared because that might be the only break that you are going to get.”