Haiti TPS is a relief — but is it also a band-aid-like solution?

OPINION: While many breathed sighs of relief when the Biden administration designated Haiti for TPS, others thought back to the country's gloomy immigration past with the United States. 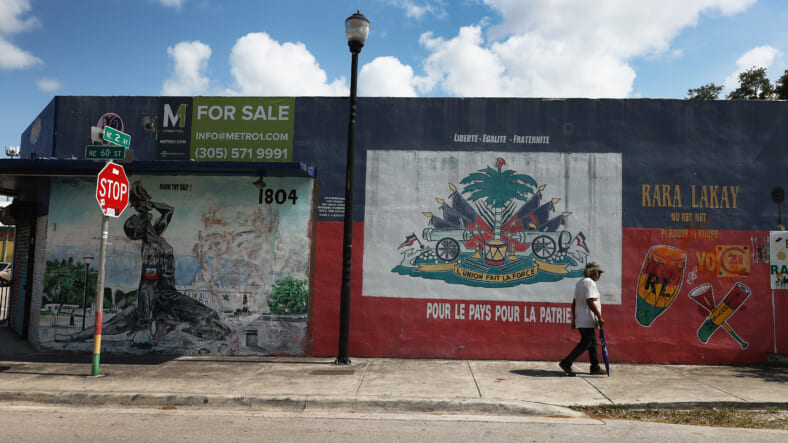 A mural on a wall in LIttle Haiti as Secretary of Homeland Security Alejandro Mayorkas held a meeting with Haitian community leaders at the Little Haiti Cultural Complex on May 25, 2021 in Miami, Florida. (Photo by Joe Raedle/Getty Images)

When Alejandro N. Mayorkas, the first Latino Secretary of Homeland Security, designated Haiti for Temporary Protected Status (TPS) for 18 months, many Haitians rejoiced. Finally, their cries for relief had been heard by a fellow islander, as Secretary Mayorkas is Cuban-born —a fact not lost on the thousands of Haitians affected by the current bouts of insecurity in their home country.

And while many breathed sighs of relief, others thought back to Haiti’s gloomy immigration past with the United States.

Historical context is important here, as one cannot understand Haiti’s murky immigration history with the United States, without taking a look into the past. The significance of Mayorkas understanding the plight of the Haitian people may stem from his understanding of what revolution looks like — as his own family fled Cuba shortly after the Cuban Revolution.

This policy has often been frowned upon by the immigration community as preferential treatment for a single group of migrants and was ended by the Obama administration in 2017. The Haitian community has a particularly long memory of this heinous policy as it disallowed Haitians who had risked their lives at sea (just like their Cuban counterparts) and had reached American soil to stay.

While many advocates of the policy justified it with notes of ideological differences between the communist country and the United States, to most Haitians there was a much simpler explanation — racism.

Fast forward four years later under Obama’s former vice president, we are seeing glimmers of hope. President Joe Biden, alongside Secretary Mayorkas has designated Haiti TPS for 18-months. This new designation enables Haitian nationals and individuals without residency who last resided in Haiti, the ability to file applications for TPS — as long as they qualify via eligibility requirements.

What he failed to do was condemn Haiti President Jovenel Moïse’s administration for this abject failure. Neither President Biden nor Secretary Mayorkas has released a decisive statement on the failure of the JoMo (Jovenel Moïse) regime and its oppressive nature. This silence has been regarded as unequivocal support within the international community. Support for an administration that currently functions as a dictatorship — run by presidential decree.

Read More: Haiti is on its 6th prime minister under the Moïse administration and many are wondering why?

However, this is not the first time the Haitian community has benefited from TPS. Under the Obama administration, Secretary Janet Napolitano designated Haitians as eligible for TPS following the January 2010 earthquake. These protections were extended in 2011, 2013, 2015 and 2017. But in January 2018, under the Trump administration, the TPS status for Haitians came to a screeching halt when it was declared that effective July 22, 2019, the status of Haiti’s TPS designation would be terminated.

Immigration lawyers like Vanessa Joseph challenged these terminations and fought on the behalf of Haiti beneficiaries to retain their TPS status but warned that TPS was in fact what the title suggested — a temporary solution. Joseph notes that as an advocate she continues in the fight for a more permanent solution.

“The state of the immigration system as it currently stands lacks compassion and the allowance for human dignity — which disproportionately and adversely affects Black immigrants,” Joseph tells theGrio. “Currently, the immigration system seems to lean towards the idea that citizens from other countries are unwanted.”

Joseph also cautions that the idea that TPS is enough must be rejected and instead insisted that advocates and government alike should coalesce to ensure that the immigration system does not continue to be malignant.

When the United States government can finally be honest about the root causes of why immigration happens (and why it is happening in Haiti specifically) we may finally be able to be intentional about solving these issues longitudinally so that people do not desire to leave the only place they know as home.

Human nature dictates that people yearn to be close to what they know and thus when people resign themselves to the idea of fleeing it usually serves as an indicator of the perilous situation back home. In this circumstance — until the Biden administration addresses the Moise administration at its crux — the TPS solution is only a temporary tourniquet to a country that is losing blood rapidly.

Once the band-aid falls off in 18-months — and it will — the Haitian community will once again be challenged with the conundrum of how to seek a more permanent solution to the country’s oozing instability.