"He just has a heart for people," counselor Yolanda Curry said of Joshua Nelson.

A Missouri teen who saved $9,000 to pay for his college tuition is now paying it forward after earning a college scholarship worth $43,000.

“I plan to go to Southeast Missouri State (SEMO) and go into their pre-optometry program. I’ll be majoring in bio-medical sciences,” said Nelson. He explained to Good Morning America on Wednesday that the money he had been saving up for months to pay for his college tuition will now support the higher learning goals of his fellow classmates. The move was inspired after he was awarded the President’s Scholarship from SEMO, considered the university’s “most prestigious” (valued at $43,000) and awarded to five top students annually, according to the school’s website.

Nelson will be attending the university in the fall.

Nelson intends to use the $9,000 he saved to fund a scholarship at St. Charles West High School. The teen will give annual $1,000 payments to graduating students as part of the Joshua Nelson Leaders In Action Scholarship, PEOPLE reports.

“It comes from my upbringing and faith,” Nelson said of his generosity to GMA. “I’ve always lived by strong principles as far as being a cheerful giver and having an open hand when it comes to giving back so I feel like that really motivated me.”

He decided to fund an annual scholarship at his high school after meeting with his counselor Curry, according to GMA.

“I was actually shocked… I wasn’t expecting it at all!” Curry recalled. “He asked if we could Zoom one day because he had a great idea and wanted to share it with me. I could tell he was really excited.”

On June 1, Darrell Montalvo-Luna became the first recipient of Nelson’s scholarship. He presented her with a giant $2,000 check, with an additional 1,000 for being the inaugural recipient, according to the report.

“Joshua has the heart of a servant leader,” Curry told GMA of the teen’s actions. “He leads by example and he’s genuinely excited when good things happen for other people.”

“He’s an encourager,” she continued. “He’s good at building others up and does what he can to help encourage and motivate those around him.”

“I think he’s an inspiration to some of the other people at the school especially students of color,” said classmate Harmony Hudson. “I don’t even think he realizes that he’s doing that much for everyone else as well.” 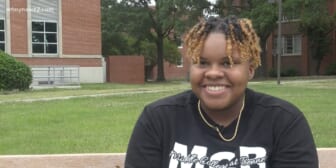 “I really thought it was important to give back to my community that poured in so much to me,” Nelson said.

The City of St. Charles School District said in a statement on Facebook: “Josh is a member of the National Honor Society, the varsity boys basketball team, the Fellowship of Christian Athletes, and is president of the Multicultural Achievement Council (MAC) Scholars of SCW. He’s an amazing student and we’re proud to call him one of our own.”

Nelson is looking forward to putting his knowlege in biomedical sciences to use in the future. .

“My whole family has very poor vision, we’re all relying on contacts and glasses,” he explained to GMA. “I was thinking if I want to go into the medical field, let me go somewhere that’s going to help me and my family.”

“If you take into consideration how much vision is going to downgrade due to exposure to blue lights with technology and stuff, I feel like it’s going to be a much needed profession,” he added.