Etute is currently being held at Montgomery County Jail without bond

Virginia Tech football player Isimemen Etute, 18, was charged with second-degree murder after the death of a Blacksburg resident.

The incident happened on Tuesday evening in Blacksburg, home of Virginia Tech. When police responded to a welfare check, officers found 40-year-old Jerry Smith dead, according to authorities. Detectives were then called to the scene to initiate a death investigation, later ruling the death a homicide. A specific cause of death has not been released.

The investigation revealed that Smith and Etute were “acquaintances,” according to Blacksburg Police. Investigators have identified and interviewed multiple witnesses and there is no ongoing threat to the public, according to officials. 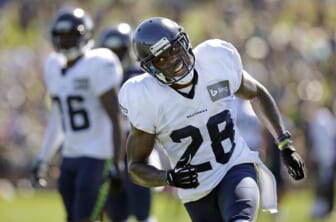 Etute is currently being held at Montgomery County Jail without bond. A local outlet reported that Etute made his appearance in virtual court on Thursday. The judge appointed him an attorney and scheduled his next court appearance for Sept. 23, according to WFXR.

Virginia Tech said the freshman linebacker has been suspended from the team. Etute enrolled early at Virginia Tech and participated in spring practice as he competed for a linebacker reserve position, according to ESPN.

Virginia Tech released a statement, reading in part: “Blacksburg Police have announced the arrest of a Virginia Tech student in connection to the death of a Blacksburg resident early Wednesday morning.

The student arrested is Isimemen Etute of Virginia Beach, Virginia, a freshman majoring in human development. Etute has been charged with second-degree murder. In the case of a felony arrest, the university has the authority to place a student on immediate interim suspension.

In addition, Etute, a member of the football team, has been suspended from the team, effective immediately. Blacksburg Police continues to lead this ongoing investigation, and the university will assist law enforcement agencies working the case in any way it can.”

Virgina Tech leaders offered their words of support to the community during this time.

“The Virginia Tech and Town of Blacksburg communities are united in our shared concern for the welfare of all,” Virginia tech shared. “Together, we denounce all acts of violence and stand together in support of one another. You don’t need to be close to this to be affected by this. If you need assistance or support, you are encouraged to reach out for help.”