A Connecticut man is believed to have killed his wife and a young woman who was dating his stepdaughter before turning his gun on himself.

Police in Windsor Locks, Connecticut responded to a residence after witnesses reported hearing “yelling and screaming” early Friday morning followed by gunshots. Arriving officers found the bodies of two women and one man, all pronounced dead at the scene.

Delores Wisdom and her husband, David Wisdom, along with 18-year-old Lauren Leslie have been identified by the medical examiner. A fourth person was also shot and is listed in stable condition, a victim who has not been positively identified but is believed to be Delores Wisdom’s daughter and Leslie’s girlfriend. A fifth person, David Wisdom’s son, was found unharmed in the home.

Delores Wisdom was employed at a local food bank. The president of FoodShare released a statement saying their employees were “heartbroken and devastated.”

“Delores was more than just our co-worker, she was our friend,” said Jason Jakubowski. “She had an energy and a charisma that would light up any room she was in, and her passion for the work that we do was undeniably infectious. It’s going to take us all a while to wrap our heads around this … but for now, our family simply prays for Delores and hers.”

Close kin of Leslie told The Journal Inquirer the teenager was in a relationship with Delores Wisdom’s daughter and that David Wisdom, the stepfather, was uncomfortable with the relationship. Lt. Paul Cherniak of the Windsor Locks Police Department did not confirm the narrative. 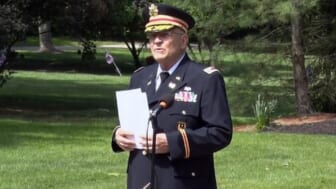 “She fought for that. She wasn’t always herself. She had to grow into that, she had to fight for it, through all the prejudice that she went through, people judging her, and the things they would say about her,” Jhavier Leslie told the newspaper.

“This is a part of a greater issue in our society, especially black communities. It’s very difficult for us. We don’t have many safe spaces even with our family,” he said. “I don’t want my sister’s death to be in vain, I hope change does happen with homophobia and the dangers around that, and also mental health, and gun control.”