"We are demanding that the police review their policies on what constitutes hate speech, because this was indeed deliberate and intentional," the gallery declared.

The owners of the Black Wall Street Gallery in New York City are speaking out after the space was vandalized three times this week.

Located in Soho, the gallery was founded to pay tribute to the 1921 Tulsa race massacre, and it was targeted by a suspected racist hater on May 31, the 100-year anniversary of the deadly event.

In a statement posted on Facebook, the gallery said its logo was smeared with white paint on Monday, and attacked two more times this week, with vandals writing “ETC REAL ART,” on the windows in black marker on Wednesday, according to the New York Post. 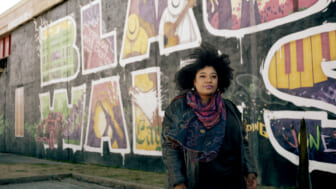 “We are demanding that the police review their policies on what constitutes hate speech, because this was indeed deliberate and intentional. All one has to do is look at the facts. We are Black Wall Street Gallery and this incident occurred exactly 100 years after the massacre,” the gallery wrote in a Facebook post.

“We are neither shocked nor surprised that merely three days after opening on 26 Mercer Street, in celebration of our ancestors, that we would find a literal whitewashing of Black Wall Street on our front window,” owner and director Ricco Wright said on Thursday.

“So now I stand before you today to not only denounce the hate crime, but also to say to the NYPD, ‘Let’s hurry and deem this what it is and let’s understand the variance of hate that exists around us, and to understand it doesn’t take a noose hanging on a door to realize something’s hate,” Wright said.

The NYPD has two ongoing investigations into two incidents of vandalism reported at the gallery on May 31 and June 1, NBC News reports.

“I know hate when I see it,” said Jeffrey Maddrey, chief of the New York Police Department’s community affairs bureau, The Hill reports. “And what happened here was all of that.”

The NYPD released video footage of the Monday incident asking the public for help identifying the suspect.

Over a hundred years ago, Black Americans owned land and built a thriving business community in Greenwood. But in 1921, white Tulsans unleashed a wave of violence on the residents and business owners in the area, callously murdering scores of Black people and destroying what was viewed as a symbol of Black success, theGRIO reported.

Although new businesses have sprung up all around the Greenwood district, they’re mainly white-owned.

According to The Washington Post, millions of dollars in financial incentives have been spent to revitalize the district ahead of an anticipated influx of tourists for this year’s centennial of the 1921 massacre, and Black entrepreneurs say they are being shut out of Greenwood’s development projects and priced out of prime retail locations.

White-owned firms have won the majority of contracts to develop lucrative businesses closest to downtown, according to city officials and business leaders. 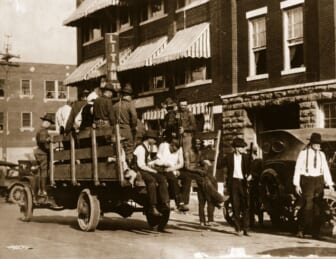 On Monday, President Joe Biden declared Monday a “Day of Remembrance: 100 Years After The 1921 Tulsa Race Massacre” and he became the first sitting president to visit Tulsa on the riot anniversary.

“The only way to build common ground is to truly repair and to rebuild. I come here to help fill the silence because in silence wounds deepen,” the president said Monday.

“We honor the legacy of the Greenwood community, and of Black Wall Street, by reaffirming our commitment to advance racial justice through the whole of our government, and working to root out systemic racism from our laws, our policies, and our hearts,” Biden said.

Meanwhile, the Black Wall Street Gallery will be open in New York City’s SoHo neighborhood until June 19th, also known as Juneteenth, the holiday marking the end of slavery in the United States. On June 19, 1865, in Galveston, Texas, Major General Gordon Granger issued General Order No. 3, which announced that, in accordance with the Emancipation Proclamation, “all slaves are free.”