Texas mom, son killed on his 17th birthday by husband in murder-suicide

Fort Worth, Texas mother Holly Beverly and her son Titus Atkins were tragically murdered by Beverly’s estranged husband last Tuesday. The 39 year-old and her son were shot to death around midnight on June 1, the same day that Atkins turned 17, the Fort Worth Star Telegram reports.

Tarrant County police confirmed that Holly Beverly and the assailant, 39 year-old Timothy Beverly were spouses who had been estranged for over two years. Records show that Timothy Beverly was not Atkins’ biological father.

On the night of the double murder and suicide, neighbors reported hearing loud banging and yells of someone saying to “give me my boy” and “give me that boy.”

Based on witness accounts and a crime scene full of bullet shells, it appears that Timothy Beverly shot his way into the apartment. The mother and son died from gunshot wounds, which Beverly had in her chest and head; Atkins was shot in the chest, according to the Fort Worth Star Telegram. Timothy Beverly turned the gun on himself and died from a gunshot wound to the head.

Holly Beverly was a teacher at Hope Works Christian Academy and single mother who lived with her three children in the Westland Estates Apartments on the city’s west side. On the night of the double murder and suicide, Holly Beverly’s two other children were able to run out the apartment.

Although Tarrant County police have not confirmed a motive, investigators have described it as a domestic violence crime.

Last week, family members launched a GoFundMe page to cover funeral expenses and support Holly Beverly’s two surviving children, 12 year-old Tyrell and 18 year-old Trinity. Holly Beverly is remembered as someone who “loved Jesus and her family,” and “fiercely, and tirelessly provided for her three children as a single mother.”

According to the fundraiser’s organizer, Atkins had plans to serve in the military in the near future.

“Titus was kind, helpful and exceptionally bright; graduating from high school one year early (May 2021) as Valedictorian. He loved to work, and was excited to have just been promoted after a short time working at McDonald’s,” the page reads. 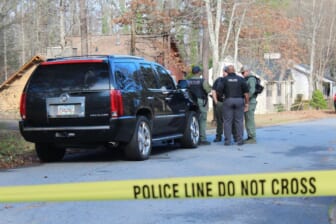 Also Read:
Georgia mom killed by boyfriend at her job in murder-suicide

The grieving family is still looking for information about what happened and have planned a funeral service for Holly Beverly and Atkins scheduled for this week.

“We just know that night was a very violent night, and from what I’m hearing, talking to the other kids and stuff, that Titus was trying to help his mother. He was like a little hero,” said Holly Beverly’s father and Atkins’ grandfather Sam Midkiff.

The Domestic Violence Hotline at 1-800-799-7233 provides 24/7, free, and confidential resources for those experiencing domestic abuse.