"She is more than we could have ever imagined."

As theGrio previously reported, her first name, Lilibet, is a nod to Her Majesty The Queen’s nickname. The baby’s name is in honor of Harry’s grandmother and his mother, the late Princess Diana. The name Lili also pays tribute to Meghan’s mother Doria Ragland.

The former actress shared in a blog post on her now-defunct lifestyle site, The Tig, that her nicknames include “Meg, MM, M&M, and Flower (which my mom has called me since I was little),” she wrote, as reported by PEOPLE. 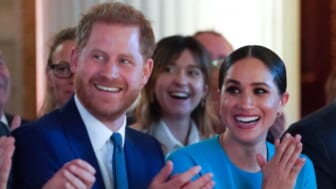 On Sunday, Meghan and Harry shared the news of their daughter’s birth in a statement.

“Lili was born on Friday, June 4 at 11:40 a.m. in the trusted care of the doctors and staff at Santa Barbara Cottage Hospital in Santa Barbara, CA. She weighed 7 lbs 11 oz. Both mother and child are healthy and well, and settling in at home,” the couple said. “Lili is named after her great-grandmother, Her Majesty The Queen, whose family nickname is Lilibet. Her middle name, Diana, was chosen to honor her beloved late grandmother, The Princess of Wales.”

The Duke and Duchess of Sussex added, “She is more than we could have ever imagined, and we remain grateful for the love and prayers we’ve felt from across the globe. Thank you for your continued kindness and support during this very special time for our family.”

No photos of the newborn or the Sussexes accompanied the announcement.

Harry and Meghan married at Windsor Castle in May 2018. Their son Archie Harrison Mountbatten-Windsor was born a year later. The birth of their newborn daughter comes after the royal couple’s explosive TV interview with Oprah Winfrey in March.

They described painful discussions about the color of their first child’s skin, losing royal protection, and the intense pressures that led Meghan to contemplate suicide. She also noted that her mother remained in “silent dignity” throughout the couple’s process of exiting the U.K.

“I did everything I could to protect [my parents] in that media frenzy, but for over a year, the UK tabloids were trying to find my dad, offering people so much money to try and find his address,” Markle told Winfrey. “Once they did… the tabloids moved into the apartment next door and across from him, descended on this small town, [and began giving] him gifts. The whole thing just brings us to where we are today.”

Meghan previously referred to her mother as her “best friend.” She told Winfrey that while her father has notoriously spilled the tea to the tabloids, her mother has remained her constant, loyal support.

“Everyone has accountability. Look, they hunted my mom down, and you’ve never heard her say a word,” she said of her mother. “She’s remained in silent dignity for four years, watching me go through this.”

Despite leaving royal duties, Harry’s place in the order of succession to the throne remains. His daughter is the eighth in line to the British throne. The first seven places remain unchanged: Prince Charles; Prince William; his son Prince George, his siblings Princess Charlotte and Prince Louis; Prince Harry, and his son Archie Mountbatten-Windsor.