Corey Hawkins, Leslie Grace say Afro-Latinx diversity in ‘In The Heights’ is ‘just the beginning’

EXCLUSIVE: The two actors, along with co-stars Melissa Barrera and Gregory Diaz IV, say that the movie musical is tackling a glaring omission in Hollywood

Corey Hawkins and Leslie Grace understand how rare a film like In The Heights is.

The two castmates, who star as love interests Benny and Nina Rosario in the film, told theGrio exclusively that the film’s emphasis on not only Latinx diversity, but also the Afro-Latinx experience, is something remarkable and beautiful in Hollywood.

“Sometimes we feel as though we need to see ourselves to be something, and we don’t necessarily, but it sure does make it easier,” said Grace, 26, who is Dominican and identifies as Afro-Latina. “It sure does make it feel better to be yourself when you’ve seen somebody else that looks like you, or is where you’re from, do what you want to do.”

“It’s also very encouraging, I think, to all communities that have felt marginalized to see a story told by someone who knows the story, and then feel empowered to do it themselves. If they don’t see themselves through this movie, then they say, ‘Okay, there’s something missing. Let me tell that story.’ That’s the big story around this movie. It’s not just the story about In The Heights, this beautiful musical that we tell on screen, but it’s what it took to make this movie be shared to the world. I hope that people are inspired by that.” 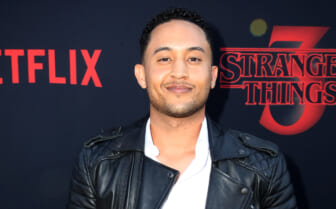 Hawkins, 32, agreed with his co-star, adding that audiences “needed” the film’s diverse representation. While Hawkins’ character is not Afro-Latino, he brings his own unique perspective as the only Black American lead in the movie musical, which also stars Anthony Ramos, Jimmy Smits, Melissa Barrera and Dascha Polanco.

“You never know what you’re missing until you actually see it,” Hawkins explained. “I remember growing up as a Black man in DC, Black boy in DC, and seeing a lot of white faces on television and a screen. Sometimes you start to think that you need to aspire to something that is other than yourself. I’m so fortunate, and we’re so fortunate, we live in a world and time where this amount of change is happening. This amount of representation is being put out there.”

He continued, “In The Heights is like that times 100. Every little detail [director] Jon Chu captured, every voice is being raised, every flag is being raised for the Latinx community for sure in this movie. And it’s just the beginning.”

Hawkins’ character, Benny, is tasked with rapping several verses and songs throughout In The Heights, including his breakout solo, “Benny’s Dispatch.”

The Washington D.C. native, who starred as Dr. Dre in 2015’s Straight Outta Compton, told theGrio that he didn’t use his Dre experience to perfect his rap style, instead relying on the In The Heights Broadway soundtrack.

“I love hip hop. I always call Lin [Manuel Miranda] a poet of the streets. It comes from an organic place, and no matter where you’re from, you’re going to relate to it. Because you see yourself in it in some way, and I definitely do. For me, I was a fan of the soundtrack. I saw the show on Broadway years ago. Chris Jackson played Benny on Broadway. He also played George Washington in Hamilton. He’s a legend on Broadway, legend in general.” 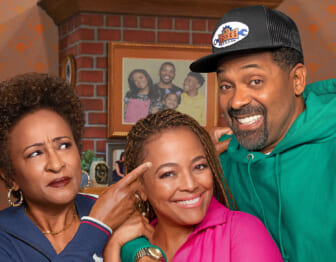 “I just listened to the soundtrack over and over and over, and rocked until the tape pops. You know, like literally, just kept going in. My preparation had already been just getting those words in, in the body, but you need to because it’s like listening to the musical theater greats. It’s like the work has to come so that it looks easy or feels easier, sounds easy, but it isn’t.”

Hawkins wasn’t the only actor rapping in the Lin-Manuel Miranda produced musical. Gregory Diaz IV spits some quick-paced lyrics himself as little cousin Sonny de la Vega. The 16-year-old New York native said he learned to rap as a child while listening to his parent’s music.

“I think my whole life was leading up to that moment, honestly,” Diaz explained. “Growing up in New York, both my parents were born in the ’80s. They just really grew up listening to that old school hip hop and rap. [But it was] also just hearing everything that was new on the radio and just kind of combining both aspects.”

“During the rapping for [breakout song] ‘96,000,’ I kind of channeled a lot of different rappers that I grew up listening to. One of them was DMX, and the way I really put infliction. I think there’s even a point where I kind of do like a little growl, which is very DMX. So just like, you know, growing up, listening to music around the house, out in the streets and just channeling that into the rap.”

Fans can watch theGrio‘s full interview with Corey Hawkins above.