Omar made clear she wasn't making "a moral comparison between Hamas and the Taliban and the U.S. and Israel."

House Democrats released a joint statement in response to comments made by Minnesota Rep. Ilhan Omar, which conservatives and Jewish democrats say compared the U.S. and Israel to terrorist organizations.

On Monday, the progressive Omar posted a video of herself on Twitter questioning Secretary of State Anthony Blinken. “We must have the same level of accountability and justice for all victims of crimes against humanity,” she captioned the tweet. “We have seen unthinkable atrocities committed by the U.S., Hamas, Israel, Afghanistan, and the Taliban.”

Two days later, 12 Jewish Democrats issued a statement calling on Omar to clarify her remarks. She later said, “I was in no way equating terrorist organizations with democratic countries with well-established judicial systems.” 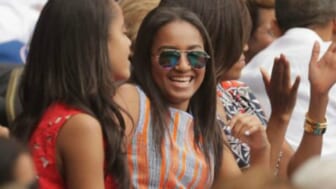 “Legitimate criticism of the policies of both the United States and Israel is protected by the values of free speech and democratic debate. And indeed, such criticism is essential to the strength and health of our democracies,” the party leadership team wrote. “But drawing false equivalencies between democracies like the U.S. and Israel and groups that engage in terrorism like Hamas and the Taliban foments prejudice and undermines progress toward a future of peace and security for all.”

Omar clarified that her comments were about ongoing International Criminal Court probes, “not a moral comparison between Hamas and the Taliban and the U.S. and Israel.”

In their statement, the House Democratic leadership responded to Omar’s clarification, writing: “We welcome the clarification by Congresswoman Omar that there is no moral equivalency between the U.S. and Israel and Hamas and the Taliban.”