Exclusive: McGuire, a leader in the finance industry, wants to lead New York City through the philosophy of "shared prosperity and economic prosperity”

New York City mayoral candidates are set to face off in a verbal sparring match on Saturday. The list of candidates is long, however, the question is who will emerge as the winner in the upcoming debate and ultimately claim the top seat in the city.

One of the candidates on the roster for the debate is Ray McGuire of Citigroup, a Black leader in the finance industry who wants to lead NYC through the philosophy of “shared prosperity and economic prosperity” especially for “the least of these.”

McGuire exclusively told theGrio, “We need to get jobs in our community. We’ve got a stated unemployment rate in New York City or somewhere in the 10 to 11, 12, 13% in many of our communities of 20 plus percent. We need to invest in our people.”

New York City was once led by financial tech mogul Michael Bloomberg for three terms as mayor. While some might make a comparison between the two based on their financial backgrounds, McGuire says the contrast between the two is stark.

The Black multimillionaire says, “I wake up Black every day. Last I checked, he doesn’t.” 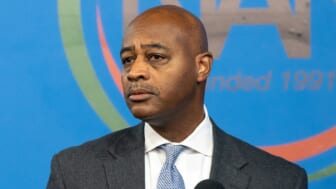 McGuire contends his childhood deeply impacted his campaign platform’s emphasis on education. He credits being raised by a single mom and witnessing education redirect the path society would consider set for him to be the main reason an investment in education is essential to NYC’s youth who are growing up with similar challenges as he faced.

“In my education plan, starting at the sixth grade, I got digital and financial literacy,” McGuire said. “Sixth grade and digital may start earlier because I’m in a technology world, but no child gets out of the sixth grade.”

Another aspect of McGuire’s plan focuses on graduating kids into a career job or into some sort of higher education studies, which could “include vocational training, software, engineer, painter, plumber, paleontologist, botanist.”

McGuire went on to attend Harvard College, Harvard Law and Harvard Business school and made his mark in finance working with Citi for 13 years. Although McGuire is ranking as an underdog in the mayoral race, his list of agenda items incorporates his passion for money and finance and wealth-building by bridging the wealth gap between Blacks and Whites.

McGuire reflected on the death and destruction of this past year during the pandemic which crippled the Black community, highlighting “New York City spent $22.5 billion. … MWBE’s, Black and Brown businesses, eight out of 10 got zero nothing.”

To address the disparity and the resulting closure of many Black businesses, McGuire wants to open up the channels for minority businesses to connect to that business-saving lifeline.

“That means getting capital to our community. That means making certain that those who are young entrepreneurs get access to capital, get access to know how,” McGuire explained.

Going hand in hand with a plan for businesses, McGuire sees a need to take on the tax code and its inequality for minorities, declaring that it needs to be “more modern to accommodate those who are homeowners and make sure it’s not disproportionate.”

He has a plan too for those on the lowest rungs of the economic scale. “For the low-income earners who have property values that are pretty high, we need to be able to graduate them and gradually into how they can continue to live in their homes and pay the tax bills,” he said.

With all of McGuire’s achievements he is also credited with giving philanthropist and billionaire Robert Smith his first job.