The inaugural induction and unveiling ceremony of the Black Music and Entertainment Walk of Fame brought the stars out as they made history in Atlanta.

It was a celebration filled with music, marching band performances and smiles as everyone from celebrities to politicians came together to honor the moment.

Some of the inductees were present for the honor while others sent family and friends to represent on their behalf.

Kirk Franklin attended the event and spoke with theGrio about how he felt about being recognized.

The Grammy-winning artist said many more people deserve to be celebrated.

“So all I am is a person that wants to make sure that people know that I’m standing on great shoulders from an incredible genre of music and musicians that deserve this opportunity to be seen and celebrated,” Franklin told theGrio.

Georgia State Representative Erica Thomas is one of the founders of the Black Music and Entertainment Walk of Fame, which came to life after the Atlanta City Council recently passed an ordinance to approve the installation.

It was finalized via an agreement between the City of Atlanta, the Georgia Entertainment Caucus and the Black American Music Association.

Thomas, along with members of the Georgia Entertainment Caucus, hosted the event on Thursday. 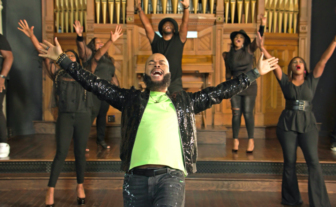 “I want to thank Mayor Keisha Lance Bottoms and the Atlanta City Council for helping this Walk of Fame come to fruition, especially Councilman Antonio Brown who introduced the local ordinance,” Thomas said.

“As those around us try to silence Black history, it is more important than ever to preserve Black history. Our stories will not be silenced. Our history will not be forgotten. And, now, the success of Black creators and entertainers will be memorialized here in Atlanta.”

This day touched many community members, including activist and author Kimberly Latrice Jones, who runs a production company called Push Films that helped sponsor the event. Jones was one of the alternate voters who got to sit on the calls and chime in to vote when there were opportunities.

“Honoring them is key and critical because this is part of the problem, especially right now as we’re having this intricate conversation about critical race theory, to have them get the acknowledgment that they deserve, to talk about the contributions we as African Americans have made to this nation,” Jones told theGrio.

“This is part of us honoring our value and letting the world know you cannot deny the value of Black Americans.”

Several people from around Atlanta also expressed joy in this moment.

“Being from the westside of Atlanta and seeing something amazing and historical and groundbreaking like this is truly inspiring,” said Britt Jones-Chukura, Atlanta activist and organizer. “Atlanta is known to change the culture nationwide so it’s been about time that we recognize the influencers as well as the entertainers who continue to inspire youth and community members.”

Among the speakers at the ceremony were Bottoms, CEO of AMB Sports and Entertainment Stephen Cannon, and many other Atlanta figures.

A range of politicians also attended the event, including Black leaders in the Georgia House of Representatives. Park Cannon, Kim Schofield, Sandra Scott, Erick Allen, Derrick Jackson were there, along with candidates for Atlanta’s open mayoral position, Antonio Brown and Andre Dickens.

The Black Music and Entertainment Walk of Fame in Atlanta is located on a sidewalk along Martin Luther King Jr. Drive in front of the Mercedes Benz Stadium.