"I've got so many different feelings all gurgling up in here," said Opal Lee, aka the "Grandmother of Juneteenth"

Opal Lee, also known as the ”Grandmother of Juneteenth,” watched her vision come to fruition as Juneteenth became a national holiday.

For decades, Lee was determined to see Juneteenth receive the recognition it deserved. On June 17, 2021, it finally got it.

The 94-year-old activist from Fort Worth, Texas, had a front-row seat as President Joe Biden signed the Juneteenth National Independence Day Act into law, PEOPLE reports. It was a historical moment she took great pride in.

“I’ve got so many different feelings all gurgling up in here,” Lee told local news station KTVT. “I don’t know what to call them all. I am so delighted to know that suddenly we’ve got a Juneteenth. It’s not a Texas thing or a Black thing. It’s an American thing.”

She also stressed there is a lot more work to be done.

“We’ve got all of these disparities that we’ve got to address and I mean all of them,” she told KTVT. “While we’ve got some momentum I hope we can get some of it done. We can have one America if we try.”

The former educator and school counselor spent her time after retiring serving in the community in various capacities. According to her biography, Lee has used her platform to help create positive change and has achieved many accomplishments, like helping establish the Tarrant County Black Historical & Genealogical Society dedicated to preserving the history of the Fort Worth Black populace.

Lee has spent her life fighting as a dedicated activist who was personally touched by the cause. On Juneteenth in 1939, white rioters set her home on fire, PEOPLE reported. She opened about the devastating experience with Variety.

“People gathered. The papers say that it was 500 strong, and that the police couldn’t control them,” she recently told Variety. “My dad came home with a gun, and the police told him if he busted a cap, they’d let that mob have him.”

She stressed that all she needed was an opportunity.

“If they had given us an opportunity to stay there and be their neighbors, they would have found out we didn’t want any more than what they had – a decent place to stay, jobs that paid, [to be] able to go to school in the neighborhood, even if it was a segregated school,” she told Variety. 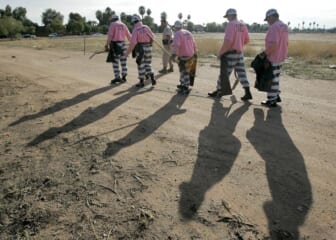 Today, she continues to create her own opportunities. Every Juneteenth, Lee embarks on her annual 2.5-mile walk to recognize the 2.5 years it took for the news of freedom to reach all enslaved people throughout the United States, according to OpalsWalk2DC.com.

She calls herself “just a little old lady in tennis shoes getting in everybody’s business.”

This journey kicked off in 2016 when Lee, who was 89, began Opal’s Walk 2 DC. She planned to walk 1400 miles from Fort Worth, Texas, to Washington, D.C. to raise awareness and gain support from Congress to name Juneteenth a national holiday officially.

Instead, she ended up completing an impressive 300 miles as her vision extended to people across the country, CNN reported. She set a goal to get 100-thousand signatures and ended up collecting more than 1.5-million signatures.

As Lee will be walking alongside her community in Fort Worth this Juneteenth, she’s encouraging folks all around the nation to join her and participate in their own way, whether it’s in a neighborhood, on a treadmill, or a local track.