Eight Black directors shared the insights, inspirations and challenges they faced while making their short films, which will premiere at the 2021 Tribeca Film Festival

Eight Black filmmakers came together to share their creative processes at Procter & Gamble’s Widen the Screen event at the 2021 Tribeca Film Festival, as part of the festival’s Juneteenth programming, in New York’s Spring Studios on Thursday.

The conversation, which highlighted four documentaries from Queen Latifah‘s Queen Collective initiative and four 8:46 films, focused on “broadening the spectrum of images and stories we see on screen to portray a more complete and dynamic view of Black life in cinema and the arts,” according to P&G.

The 8:46 films, produced by Saturday Morning, Tribeca Studios, and Procter & Gamble, are a collection of narrative shorts that reclaim the 8 minutes and 46 seconds of time that prosecutors initially believed it took to take George Floyd‘s life.

“Launched in March 2021, Widen The Screen is an expansive content creation, talent development, and partnership platform that celebrates creativity and enables Black creators to share the full richness of the Black experience,” Crystal Harrell, associate director of global diversity & inclusion communications at P&G, explained. “As part of this commitment to drive accurate portrayal of Black life on screen by building a pipeline of diverse creators behind the screen.” 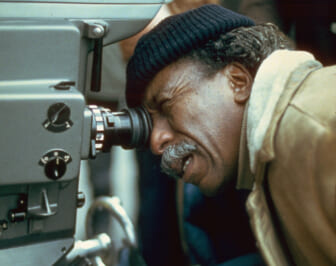 Assefa, who was pregnant with her first child when she made her film, Black Birth, shared that it was the experience of being an expectant Black mother during a pandemic that led her to create her film. The filmmaker wanted to shine a light on the maternal health disparities that Black women face in the U.S.

“Black Bird follows three expectant mothers in their third trimester of pregnancy, including myself, as they sort of navigate what it means to be a Black mother in this country,” the Ethiopian filmmaker explained. “It was inspired by a couple of things..the realities of the racial disparities for Black women in maternal health. Obviously for myself, that sort of, hits home in a different way.”

She added, “We know that history and the reality…that the lives of Black women and their sons [are in danger]. So I wanted to tackle that, but not film solely based in trauma. So this film, celebrates the life, the joy, as well as sort of the challenging aspect.”

Johnson, director and writer of the animated short She Dreams at Sunrise, shared that he was inspired to create his film after taking care of his sick aunt. After observing her hallucinating in and out of consciousness, Johnson felt that his aunt could be experiencing something beautiful—an escape of the realities of illness—during her hallucinatory state.

“When I was her caretaker, she would wake up kind of screaming. …So I would come in and calm her down and tell her ‘it’s okay,'” Johnson said about his aunt. “There were very joyful moments taking care of her, it wasn’t all sad. There was one moment I’ll never forget, where it was around five o’clock, near sunrise, and it was completely quiet. She was actually sitting up and she was laughing. So she was, like, hallucinating. She thought that she was with about four or five kids. It was the most beautiful thing I’ve ever seen.”

He continued, “I thought about ‘is there a story in that moment?’ And I thought, ‘what if instead of hallucinating, she was escaping her mundane reality from her depressing routine?’ She was using her dream to escape. So she wanted to get out of her sad world and live in this happy world. …That’s kind of where the film came from.”

WNBA superstar Tina Charles, who did not play in 2020 due to the coronavirus pandemic, revealed that it was her experience as a gamer that led her to create her film, Diverse Games, which she filmed as a way to stay involved during the 2020 season.

The Washington Mystics center said that she did not see enough gaming characters who looked like her or represented LGBTQ+ identities, pushing her to highlight a game developer working to increase that representation.

“I think the gaming industry needs meaningful representation for Black characters and inclusion. I follow Tanya DePass, who is a role-playing game developer, who is also a consultant. She goes through [the process of] making sure that minorities, LGBTQ individuals, they have access to become game developers. That they too can aspire [to that.]”

Charles continued, “She got sick and tired of not seeing herself as a superhero. I grew up playing video games, and I noticed that my [Black] characters were always the villain, or they were prostitutes or they were thugs. …So when I learned about [Tanya’s] story, I was very intrigued and I reached out to her. She was very excited and I just went for it.”

The Queen Collective films, A Song of Grace, Diverse Games, Change The Name and Black Birth, will premiere on BET on June 19 at 9 p.m. ET. The 8:46 narrative short films, Cupids, She Dreams at Sunrise, Pearl and Henry, and Slow Pulse, will be available to view later this summer.