Portland mayor announces changes to policing due to racial disparities

The move is part of new policy changes that aim to address racial disparities in traffic stops. Police Chief Chuck Lovell has directed officers to no longer stop motorists for minor offenses, including expired tags, broken headlights, and other harmless “equipment issues.”

Officers are also required to inform drivers that they can decline searches and any consent for searches must be audio recorded, as reported by KATU.

Mayor Wheeler, who serves as the city’s police commissioner, said the new directive is in response to the number of Black drivers “who are disproportionately impacted by consent searches and traffic stops.” Black people make up 6 percent of Portland’s population, but reportedly account for 23 percent of stops for non-moving violations. 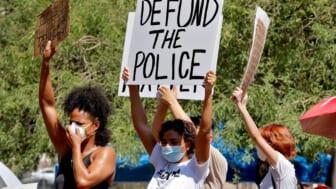 “This is a time where officers are, I think most of them know, we’re in a time of change. Reform is upon us, and we’re really looking at ways that we can meld what the community is asking for with public safety at the same time,” said Chief Lovell.

“I don’t want to over promise the results on the disparities because I’m not sure what those will be,” Lovell added. “What I think what’s important here is that we’re willing to try this. We’re willing to ask officers to do it and look at the data and see if it’s having an impact on safety, if it’s having an impact on disparities and then making appropriate judgments from there.”

Chief Lovell said the impact of the traffic stop changes will be tracked and the data shared in the future.

“We need to acknowledge that the reality that we have a scaled-down bureau, and therefore we need to focus on our top public safety priorities,” said Wheeler. “We don’t have the resources at this point to squander on anything other than the important mission of protecting the public’s safety.”

Commissioner Jo Ann Hardesty, who has been a vocal critic of the police, said she supported the changes.

“Even less violent encounters have contributed to a feeling of being profiled and thus losing trust in law enforcement,” said Hardesty. “This allows the police to focus on traffic violations that pose an immediate safety threat and other higher priority crime mitigation efforts, such as solving crimes related to the increase in gun violence.”

As previously reported by theGrio, following the Derek Chauvin guilty verdict, the Biden-Harris administration has its eyes set on police reform that would establish new federal standards with stiff penalties for officers who show disregard for human life.

Part of the plan would end qualified immunity, allowing officers to be criminally liable for deadly and unauthorized force.

Vice President Kamala Harris, in her address to the nation, discussed her efforts as a former U.S. senator when she introduced the George Floyd Justice in Policing Act.

“This bill is part of George Floyd’s legacy. The president and I will continue to urge the Senate to pass this legislation, not as a panacea for every problem but as a start,” said Harris.

The legislation would give the U.S. attorney general authority to develop and recommend a set of uniform standards for all state and local departments, as well as review departments’ accreditation standards. It also calls for mandatory use of body cameras by police.

“This work is long overdue,” Vice President Harris added. Black Americans, she said, have been historically treated “less than human.”