A Harriet Tubman monument is set to replace a Christopher Columbus statue that was removed from a national park in Newark last year.

Mayor Ras Baraka recently revealed the design of the Tubman monument, telling CBS News that “it’s a little better than what we envisioned.”

He added, “I think that it’s going to turn out to be something great.”

The Columbus statue was removed from Washington Park amid protests over the police killing of George Floyd in Minneapolis in May 2020.

“Harriet Tubman actually stepped foot here in this property, Christopher Columbus did not,” Baraka said. “So, it seems more appropriate to have a statue of Harriet Tubman and talk about the abolitionists’ work that went on that most people in New Jersey don’t even know… fighting against a system that was trying to allow slavery in this state.”

As previously reported by theGrio, two statues of Columbus that stood in Chicago parks were taken down in May at the direction of Mayor Lori Lightfoot a week after BLM protesters tried to topple one of the monuments to the Italian explorer clashed with police.

Crews used a large crane to remove the statue in downtown Chicago’s Grant Park from its pedestal. A small crowd cheered and passing cars honked as the statue came down. The second statue was removed from Arrigo Park in Chicago’s Little Italy neighborhood.

In a statement issued after the statues were taken down, the Democratic mayor’s office said they were being “temporarily removed … until further notice.”

It said the removals were “in response to demonstrations that became unsafe for both protesters and police, as well as efforts by individuals to independently pull the Grant Park statue down in an extremely dangerous manner.”

After she escaped slavery in 1949, Tubman helped free dozens of slaves through the Underground Railroad, which traveled through Newark.

Artist Nina Cooke John was tapped to design the Tubman statue for Washington Park. The design, named ‘Shadow of a Face,’ features a “ceramic-based mosaic of Tubman’s face as well as text marking the history of the Underground Railroad and the safe houses throughout New Jersey,” USA Today reports.

“As a woman, a Black woman, and mother of three girls, I am delighted to bring my memorial for Harriet Tubman to life in Newark,” John said in a news release. “My design creates a welcoming space for people to connect with Tubman as well as interact and reflect on their own liberation from whatever weight they might be carrying. This is a monument for the community and by the community.”

Hear the artist speak about her design via the clip above. 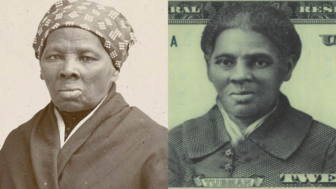 Also Read:
America needs the Harriet Tubman $20 bill, but let’s not stop there

“Ahead of the 156th anniversary of the emancipation of enslaved people in the U.S., it is only fitting that we memorialize Tubman’s heroic efforts leading slaves to better opportunities and freedom via the Underground Railroad through Newark for generations to come,” Mayor Baraka said in a statement.

“Ms. John’s work of public art will be a symbol of hope and optimism, not only for our Newark community but also for the entire country.”

Tubman’s statue will debut in the summer of 2022.