The Newark defacing of a Floyd statue was found just before 6 a.m. Thursday, and the vandalism in Brooklyn was discovered at 7:20 a.m.

Statues of George Floyd in Brooklyn, New York and Newark, New Jersey were both defaced the day before the sentencing of former Minneapolis police officer Derek Chauvin, who was found guilty of murdering Floyd in April.

According to a local report, the Brooklyn statue of Floyd’s face and the pedestal on which it stands were both spray-painted black, and the words “PatriotFront.Us” were stenciled on it, sprayed in white.

The Newark defacing was found just before 6 a.m. Thursday morning, and the vandalism in Brooklyn was discovered at 7:20 a.m., just days after its Juneteenth unveiling.

“It’s only been five days, and it’s very disheartening,” Floyd family spokesperson Courtney Nelson told ABC 7, “and it’s disgusting, and it’s sad, and it’s cowardly. And they did it like a thief in the night. But you can’t stop us.”

In the Brooklyn case, video has been released of four men walking near the statue before and after the time of the incident. Police are hoping someone can identify them.

The Newark incident appears to be directly related to the one in New York, as the vandalism there was similar. The face on the 700-pound bronze statue of Floyd seated on a park bench was also painted black, and in white paint on the torso were the words “LIFE…LIBERTY VICTORY PATRIOTFRONT.US.”

“The defacing of the statue of George Floyd has been a trend around the country,” said Newark Mayor Ras Baraka. “This horrible act is the very reason that this statue needs to remain and be upheld. As this is not just about George Floyd, it’s a deliberate effort to push back against and ultimately dismantle systems of hatred, racism and white supremacy. We celebrate those efforts in Newark, and will continue to so, despite the ignorance that has reared its ugly head.” 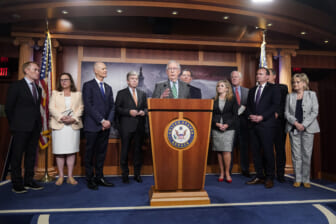 Also Read:
Republicans blocking For The People Act has everything to do with racism

The producer of the Floyd statue in Brooklyn was emotional in her reaction to the damage done. “They seem to be very aligned with the things that happened at the Capitol,” said ConfrontART’s Lindsay Eshelman. “They seem to be incredibly focused on patriotism, but in my eyes, this was not patriotism; this was terrorism.”

Any person with information on the vandalism in Brooklyn is urged to contact Crime Stoppers at 1-800-577-TIPS. Anyone with information regarding the defacing in Newark is asked to call that city’s tip line at 1-877-NWK-TIPS (695-8477).

Legal experts predict Chauvin will receive a prison sentence of 20 to 25 years today after being found guilty of second-degree murder in Floyd’s May 2020 death. Three other former Minneapolis Police officers are awaiting trial.