"For people of color, especially Black people, homeownership is wealth. It’s not only wealth to us, but it’s generational wealth,” said Fudge

“Who has student debt? Poor people, Black people, brown people. We’re the people who carry most debt,” Fudge told Axios in an interview that aired on Saturday. “The system’s already skewed toward us not being creditworthy.”

A recent report by EducationData.org found that Black college graduates owed more in debt than white graduates, and are more likely to have financial difficulty as a result.

A June 2020 study by Redfin, a real estate brokerage company, revealed that just “44% of Black families own the home they live in as of the first quarter of 2020.” This is compared to 73.7% for white families. 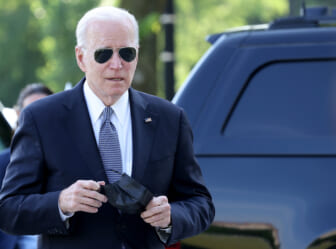 The Federal Housing Administration (FHA) in a press release on Friday announced it will modify monthly student loan payment calculations to “remove barriers and provide more access to affordable single family FHA-insured mortgage financing for creditworthy individuals with student loan debt, which has a disproportionate impact on people of color.”

Fudge said that these changes will allow people to become qualified homebuyers even if they have student debt that would otherwise be a barrier. “The person, let’s say that makes about $50,000 a year. If they want to purchase a home, maybe $200,000 or in that ballpark, they have $75,000 worth of student debt, they don’t qualify,” Fudge said. “We’re going to make that same person qualify.”

She added that after adjustments are made, that person would qualify “at a rate that gives them an opportunity to go into a home with some equity, but also be so vested in that home that they can afford to stay in that home.”

Fudge also said that the Fair Housing Act of 1968 is not being enforced as it should and that is contributing to the disproportionately low homeownership rates among Black Americans. The Act prohibits housing discrimination based on “race, color, national origin, religion, sex, familial status, and disability.”

Despite the law, Black Americans still face several difficulties in the homeownership process. For example, the Indianapolis Star reported in May that a Black woman’s home went up $149,000 in value when a white friend represented her during an appraisal. In 2020, Business Insider reported that Black families pay an average of about $60,000 more than white families in costs related to homeownership.

Insider’s Ayelet Sheffey reported that the National Association for the Advancement of Colored People (NAACP) and at least 36 different civil rlights organizations are calling upon the Biden-Harris administration to eliminate $50,000 of student loan debt per borrower.

“Student debt cancellation will help Black and brown borrowers build wealth and enable our economy to move forward as millions of Americans are able to start families, buy homes, and set up small businesses,” according to a press release from The Leadership Conference on Civil and Human Rights.

Fudge echoed these sentiments, telling Axios: “for people of color, especially Black people, homeownership is wealth. It’s not only wealth to us, but it’s generational wealth.”