EXCLUSIVE: The George Floyd Justice in Policing Act remains in negotiation on Capitol Hill, but outside police groups appear to have a silent seat at the table.

Negotiations to pass the George Floyd Justice In Policing Act on Capitol Hill are being “torpedoed” by mainstream policing organizations, says House Democratic Caucus Chair, U.S. Congressman Hakeem Jeffries of New York. The ongoing talks surrounding the details of the bill and qualified immunity have been sources of anxiety and anticipation across the country among stakeholders in Congress, civil rights and law enforcement.

The framework for the legislation was announced last week; however, sources on the Hill contend Republican Senator Tim Scott of South Carolina has extended the timeline for police reform negotiations as Scott previously said last week was the deadline.

“The issues where it’s been hardest to find agreement relate to qualified immunity reform, as well as the effort to try to make sure that when a police officer crosses the line, violates the law, they can be held criminally accountable through an appropriate standard. Beyond intentionality, but that also includes extreme recklessness or depraved indifference to human life,” Jeffries explained to theGrio.

But police organizations are attempting to block some efforts on Capitol Hill to reform law enforcement, said Jeffries.

“There are complicating factors in connection with the negotiations that are ongoing, in part that involve some of the law enforcement organizations at the national level trying to torpedo the progress that has been made. And that’s quite unfortunate because we can’t have a situation where a genuine bipartisan effort to achieve police accountability,” he said.

“It’s actually written by those police organizations that we’re trying to hold accountable — that makes zero sense. And so this is an obstacle and a stumbling block, but not an unsurprising one, because we always knew that it would exist and I still believe that it can be overcome as part of the effort to transform policing in America.”

Although Jeffries hasn’t been at the negotiations in the same way that Congresswoman Karen Bass and Senator Cory Booker have been, he’s been engaging with the deal brokers and keeping his eye on the accountability measures of the bill. Jeffries is hoping for a resolution on the legislation to occur within the next six months, however, he contends it could happen sooner.

“The police organizations don’t want to see any change in standard related to holding them criminally accountable. And they don’t want to see any reform to qualified immunity, which would lead to the ability for people to hold them civilly accountable for crossing the line and violating someone’s rights. That’s not acceptable,” Jeffries added. “But I don’t expect that Representative Bass and Senator Booker will agree to anything that is simply cosmetic.”

To give the conversations on policing a push, a collective of civil rights leaders released a statement on Tuesday urging both Democrats and Republicans to complete this police reform effort without intervention from “police unions and partisan politicians” seeking to “control and dilute the terms of the police reform bill, nor delay any of its progress.” 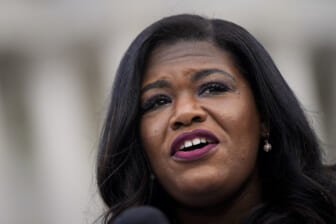 During an interview with theGrio, New York Congressman Greg Meeks said “policing reform would pass but not with everything Democrats wanted.”

Qualified immunity is the sticking point in these delicate negotiations. More specifically, the focus at the moment is the immunity police officers are given from civil lawsuits, which requires the plaintiff to show the officers clearly violated statute and constitutional rights.

This protection for officers is the very reason the George Floyd Justice in Policing Act was not signed into law on the anniversary of the murder of George Floyd by then officer Derek Chauvin, who was sentenced to 22 and a half years in prison this week for the murder.

Attorney Lee Merritt, who represents the family of Ahamud Arbery, supports expanding federal prosecutors’ authority to prosecute officers involved in misconduct but not in place of doing away with qualified immunity’s civil shield for police accountability. Additionally, he supports the language in the bill as proposed by Senator Cory Booker (D-N.J.), concerning Section 242 that deals with intention and recklessness of police behavior.

Currently, the section only allows for federal charges for intentional misconduct. Merritt wants federal review in cases of reckless police conduct as well. He cites the case of Breonna Taylor as the prime example of how the feds should have been involved immediately.

The source of caution on abolishing qualified immunity comes from Republicans on the Hill who wanted buy-in from police organizations on transparency and accountability. Mainstream organizations like the Fraternal Order of Police (FOP) stood silent. Some Black policing organizations supported the effort like the National Black Police Association, National Organization of Black Law Enforcement, also known as NOBLE.

Progressive members of Congress like Rep. Mondaire Jones (D-N.Y.), still see a pathway to getting a comprehensive bill to President Joe Biden‘s desk. But he contends “abolition of the filibuster” is the key to moving forward without compromising integral aspects of the legislation.

“We should not be having to negotiate on what is right and what we know to be true with respect to systemic racism in policing with Republican members who largely still will not be negotiating in good faith on this,” Jones explained to theGrio. “It shouldn’t come down to us getting 10 Republican votes to do the right thing on obtaining racial justice and policing or at least getting much closer to that ideal.”

Similar to Jones, advocates have been crying out for Congress to move ahead and strike while the iron is hot. 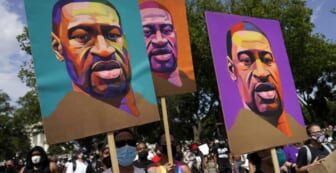 Melanie Campbell of the Black Women’s Roundtable thinks “it is time to get this done and time is of the essence. It has been a year plus and the legislative schedule is getting harder to move legislation as it gets closer to [Midterm} elections.”

When it comes to police reform, Campbell said, “We are looking for real action on this.”

Brandon Scott, mayor of Baltimore, testified at the Maryland State Capitol in Annapolis on police reform. He encourages mayors and residents across the nation to stand up and make sure police are “held to the same standards as everyone else.”  The Baltimore City Police department, because of its past policing issues stemming from the death of Freddie Gray, is being overseen by the state of Maryland. Scott plans to soon announce a task force on “how we can reimagine public safety and reallocate funds in a safe and responsible way.”

Melanie Campbell explained that a study of Black women who voted in the Essence/Black Women’s Roundtable poll found that for three years in a row the number one issue for them was systemic racism followed by police reform.