theGrio's Tatianna Mott poses the question to Dr. Christina Greer, who breaks down the Fourth of July’s history and why it’s up to each individual Black person to observe it however they choose.

Should Black people even bother celebrating the Fourth of July holiday? theGrio explores this question ahead of the occasion with the esteemed Dr. Christina Greer.

theGrio‘s Tatianna Mott is here with a new explainer series alongside Dr. Greer, associate professor of political science and American studies at Fordham University. Diving into the Fourth of July and its intricate and nuanced history, Dr. Greer opens up about what the Fourth of July means to her and why all Black people have the right to observe the holiday in whatever way they choose.

Breaking down the layers of baggage associated with Independence Day, Dr. Greer explained, “I traditionally don’t go out of my way to celebrate Independence Day. We know that Independence Day was started July 4th, 1776 when the framers … were celebrating their independence from Great Britain, and they decided that they’d have fireworks and celebrations for this development of this brand new nation.”

Despite the liberation from Great Britain, Greer said, those festivities were not meant for all people of the land.

“We know that this nation had instituted U.S. chattel slavery, was far from equal, practicing mass genocide against native peoples on their own land, women weren’t considered full citizens,” continued Greer. In her book, Black Ethnics: Race, Immigration and the Pursuit of the American Dream, she breaks down how there are plenty of Blacks in the country today whose ancestors were not around in 1776, so therefore do not feel connected to the holiday.

“I do want those of us who are descendants of U.S. chattel slavery to hopefully take a moment of reflection,” said Greer. “We do so on Juneteenth, we do so every February during Black History Month, and on July 4th, I like to actually sit and think about what Independence Day means to me because as a Black American, my ancestors are a part of the development of this nation.” 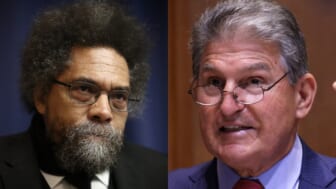 Also Read:
Cornel West says Sen. Manchin is ‘gonna have to get off his symbolic crackpipe’

“So much of this country,” she declares, “is mine.”

Check out the full video from the latest Point Black Period below.