Namibia’s elite athletes and regular citizenry alike are fuming at World Athletics, the international governing body of track and field and other running sports, for reportedly breaching a confidentiality agreement.

Abner Xoagub, president of the Namibia National Olympic Committee, said on Monday that officials at World Athletics had agreed to keep private that two 18-year-old track sensations from the African nation had been barred from competing in the 400-meter race at the Tokyo Olympics, due to their elevated natural testosterone levels.

“Throughout our communication, we agreed that we will treat this with the respect and confidentiality it deserves because of its sensitivity, but World Athletics did not take that into consideration,” Xoagub said in a statement to All Africa.

Beatrice Masilingi and Christine Mboma set national and international records during Olympic trials. Last Wednesday, in a race against Poland, Mboma became the seventh-fastest woman to ever run the 400-meter, with a time of 48.54 seconds.

Masilingi finished second in the 200m with a time of 22.65 seconds on Sunday in a race for the Diamond League in Stockholm.

However, given their seemingly rapid rise and powerful physiques, the two underwent examinations to study their chromosomes and hormone levels. Both women have XX chromosomes, are biologically female and conform to all-female requirements, according to Xoagub. However, test results on their hormones were sent to World Athletics, who removed them from the Olympic competition.

“They promised they would conduct their own tests to verify and subsequently come back to us,” said Xoagub. “But to our disappointment, we only learned on Thursday in the morning hours that World Athletics removed the names of these two athletes from the Tokyo Olympic Games’ list as far as the 400m is concerned.”

“We did not receive any further communication to this effect,” he said, “and I should say at this point, we are grossly disappointed with the way World Athletics has dealt with this issue.” 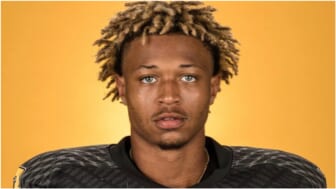 Masilingi and Mboma will be allowed to race in the 200m, their least competitive race. They were considered favorites to win medals in Tokyo.

As previously reported, none of the three 800-meter medalists from 2016’s Rio Olympics — Caster Semenya, Francine Niyonsaba and Margaret Wambui — will be allowed to defend their medals in Tokyo. Sprinter Aminatou Seyni is also being barred from competition this summer due to hormone regulations.

According to All Africa, World Athletics’ differences of sex development (DSD) regulations ban was instituted in 2018 to stop athletes with “elevated” testosterone levels from specifically participating in women’s races between 400m and 1600m.

It remains unclear whether high testosterone levels give athletes a competitive edge, despite WA’s policy.