"I always remember that I am in this position to open doors and light the path that others walk down," Taylor tweeted.

Sports journalist Maria Taylor, who has been at the center of accusations of racial favoritism at ESPN and specific acts of racism by colleague Rachel Nichols, is finally breaking her silence.

Other than doing her job as a commentator for NBA games on the network, Taylor has been silent on both Twitter and Instagram — until Wednesday.

“During the dark times, I always remember that I am in this position to open doors and light the path that others walk down,” she wrote in a tweet with photos attached featuring happier professional days. “I’ve taken some punches but that just means I’m still in the fight. Remember to lift as you climb and always KEEP RISING.” Her words were followed by a heart emoji.

Responses to Taylor’s tweet were immediate, and many were congratulatory with caveats. 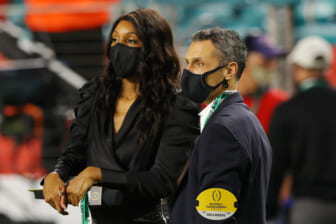 One of those congratulatory messages said: “I get the road isn’t easy but you turned down 5 mil a year to ask for 8 mil a year. I don’t know if I consider someone just being catty, dark times.”

Another user penned: “True that. But you’re also in a position to learn from those who’ve risen above you, from their perspective & experience. You’re still young yet and have the whole sky in which to grow. Just try not to knock down the rest of the trees in the forest as you reach for the stars.”

There were, of course, responses to Taylor that were purely out of genuine concern for her.

“You have earned everything at ESPN,” one fan wrote. “You work your butt off and are always over-prepared. Lions don’t worry about sheep. You are a lion and role model.”

Taylor’s remarks come after The Jump hostess Nichols offered her a public apology on Monday for comments she made in 2020 captured on a camera that, unbeknownst to her, was still rolling. On the hot mic, Nichols criticized the ESPN’s decision to have Taylor commentate from the sidelines of the NBA Finals.

She said, in part, “I wish Maria Taylor all the success in the world — she covers football, she covers basketball. If you need to give her more things to do because you are feeling pressure about your crappy longtime record on diversity — which, by the way, I know personally from the female side of it — like, go for it. Just find it somewhere else. You are not going to find it from me or taking my thing away.”

On her show on Monday, Nichols said, “The first thing they teach you in journalism school is don’t be the story, and I don’t plan to break that rule today or distract from a fantastic Finals.” 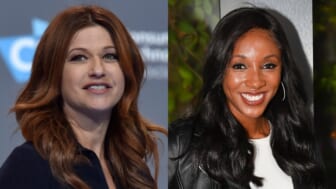 After the story broke Sunday about the year-old comments, of which ESPN officials were fully aware yet took no action, Nichols was replaced in the NBA Finals sideline coverage line-up by Malika Andrews — two days before the championship series began.

Taylor has reportedly refused to work directly with her.