The actor also opened up about his role on Hulu's acclaimed drama, The Handmaid's Tale, on the latest episode of theGrio's Acting Up

In an exclusive interview with theGrio, O-T Fagbenle opened up about his Black Widow role, the power of The Handmaid’s Tale, inequality in the world, and much more.

From the latest season of The Handmaid’s Tale to the first Marvel film in over two years (Black Widow), O-T Fagbenle is having an exciting and undoubtedly busy 2021. In an exclusive interview for theGrio‘s Acting Up podcast, the actor sat down with theGrio‘s Cortney Wills in a deep and layered conversation on his work, the real world parallels it often presents, and stepping into the MCU as a Black actor. 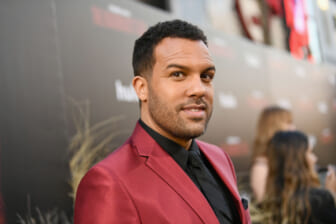 Speaking to what goes into prepping for the Marvel Universe, he explains, “part of it, to be honest, was just stopping thinking about the fact that it’s “Marvel”…because it can be overwhelming in a way!”

He continues, “You start thinking Marvel, Scarlett Johansson…really all you should be thinking about as the character and the script and how you’re going to engage with that. And so part of my work was just kind of letting go of all the hoopla around it and just engaging with text, which I’ve done for a long time. And luckily, we had a great script, great writer who created a fantastic script.”

The actor also dived into his role in the popular Hulu series, The Handmaid’s Tale. He explains on Acting Up, “For me, the two best things about it, really, are being a part of a show which is part of a bigger conversation about inequality and patriarchy and, you know, and the troubles of populism and kind of cult’s gone out of proportion, but also to be able to work with so many great actresses and directors who I’ve learned so much from.”

He also broke down how The Handmaid’s Tale premiered during the Trump years, and the differences (or lack thereof), airing the show in a post-Trump era. He explains, “Well, you know, for me personally, I look at the world and go, ‘are we dealing with huge inequality of power? Are we dealing with patriarchy…women, especially children, victims of terrible violence? Have we fixed that?’ No, we haven’t. It’s still a completely intolerable levels.”

He continued, “And so for me, I kind of feel like this show and the issues that it deals with is as present today as ever. And sometimes I feel we kind of, you know, we look at leadership we don’t like or we look at headlines we don’t like. But actually the real issues that are happening between people inside families and between gender and race…it’s still there. And the need for our activism is present as ever.”

Check out the full episode of Acting Up with O. T. Fagbenle, here.