U.S., Colombia to assist in investigation of Haiti president assassination

A Haitian leader has asked the U.S. to deploy troops to the country, but some Haitians reject the idea

The United States and Colombia plan to aid Haiti in investigating the assassination of the Caribbean nation’s president, Jovenel Moïse.

The New York Times reports that U.S. and Colombia officials say they will collaborate with Haiti.

Moïse was killed in his home on July 7, as reported by theGrio. Since the killing, no less than 20 suspects have been detained in the probe into his murder, the Times reports. Eighteen of the detainees are from Colombia, most being former members of the country’s army. Two were identified as Haitian Americans.

Haiti’s Interim Prime Minister Claude Joseph stated that Moïse was killed during an attack in his private residence, calling the incident a “hateful, inhumane and barbaric act.”

The BBC reports that Moïse’s body was found in his home with a gouged eye and 12 bullet wounds in his back. First Lady Martine Moïse was also hospitalized after the attack. 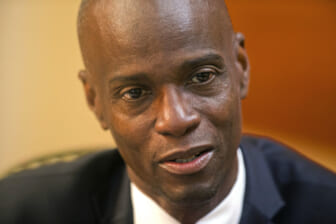 Haiti National Police Chief Léon Charles said that three men were killed by police in the aftermath of the assassination and that the country is in pursuit of more suspects, according to theGrio.

“We are going to bring them to justice,” Charles said. The chief said that eight more suspects were being searched for.

The Biden administration stated that FBI and Homeland Security officials will be traveling to Haiti’s capital city of Port-au-Prince to see what can be done to assist in the investigation. Meanwhile, the head of the Colombian national police force, General Jorge Luis Vargas, stated the country will investigate four businesses suspected of being used to recruit Colombians involved in the assassination.

Joseph confirmed with The Associated Press that he has requested that the U.S. deploy troops to the country, but some Haitians reject the idea.

Former United Nations official and Haitian pro-democracy activist Monique Clesca tweeted on Friday, “The de facto prime minister Claude Joseph does not have any legitimacy to make such a request in our name. No, No & No.”

Haitian opposition leader and human rights lawyer André Michel also took to social media to express that the investigation into the assassination and political unrest in the country must reside solely in the hands of the country.

“The solution to the crisis must be Haitian,” Michel said in a tweet translated from French.

So far, four of Moïse’s bodyguards are scheduled to be questioned by Haitian authorities next week, according to a report from The Daily Beast, since the assailants were able to enter the president’s residence with little defense.

U.S. officials are questioning if Haiti’s security structure may have been involved in the assassination plot.