"In the blink of an eye, the mercenaries entered my home and riddled my husband with bullets," First Lady Martine Moïse says in her first public message since the assassination

Martine Moïse, the wife of assassinated Haitian President Jovenel Moïse, has spoken for the first time since she was critically injured in an attack on the leader last week at the couple’s Port-au-Prince home.

As previously reported by theGrio, the First Lady was hospitalized following the overnight attack. In an audio message posted on her official Twitter account on Saturday, Moïse said the attack happened “in the blink of an eye.”

She has also called on Haiti not to “lose its way” in the aftermath of the assassination.

“I am alive, thanks to God,” Moïse said in Creole in the audio message.

The AFP news agency confirmed the remarks, translated into English, as authentic by way of Haiti’s minister of culture and communications, Pradel Henriquez.

“I am alive but I have lost my husband Jovenel,” she added. 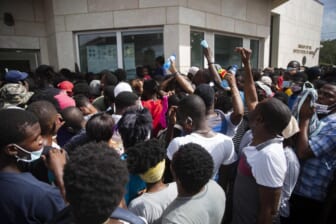 Moïse was hospitalized at a Haitian hospital after being shot during the attack and was later evacuated to Miami for further treatment.

“In the blink of an eye, the mercenaries entered my home and riddled my husband with bullets … without even giving him a chance to say a word,” she said in the audio message.

She said the mercenaries were sent to kill her husband “because of roads, water, electricity and referendum, as well as elections at the end of the year so that there is no transition in the country.”

“I am crying, it is true, but we cannot let the country lose its way,” Moïse said. “We cannot let his blood … have been spilled in vain.”

Per The Associated Press, the nation of more than 11 million people had grown increasingly unstable and disgruntled under Moïse, who served as president since 2017.

In recent months, large protests have rocked the country, which suffers from widespread poverty. Prior to the killing, many Haitians urged Moïse to step down, saying his five-year term expired in February 2021. But Moïse insisted his presidency expired next year, as reported by Al Jazeera.

Moïse, who was 53, had been ruling by decree for more than two years after the country failed to hold elections, which led to Parliament being dissolved. Opposition leaders have accused him of seeking to increase his power, including approving a decree that limited the powers of a court that audits government contracts and another that created an intelligence agency that answers only to the president, as reported by The AP.

Haiti’s economic, political and social woes have deepened recently, with gang violence spiking heavily in the capital of Port-au-Prince, inflation spiraling and food and fuel becoming scarcer at times in a country where 60% of the population makes less than $2 a day. Moïse’s death has thrown Haiti into increased political instability.

“The country’s security situation is under the control of the National Police of Haiti and the Armed Forces of Haiti,” Joseph said in a statement following Moïse’s death. “Democracy and the republic will win.” 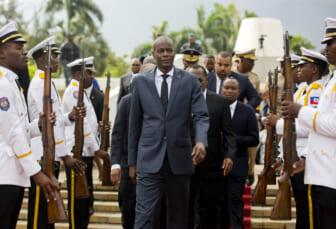 Jimmy Cherizier, an ex-cop who now leads the gang-affiliated “G9” federation, has accused police and opposition politicians of conspiring with the “stinking bourgeoisie” to “sacrifice” Moïse.

“It was a national and international conspiracy against the Haitian people,” he said in a video statement, per the report.

Haiti’s interim government said it asked the U.S. to deploy troops to protect key infrastructure as it tries to stabilize the country and prepare for elections in the aftermath of Moïse’s assassination, theGrio reported.

Amid the confusion, hundreds of Haitians gathered outside the U.S. Embassy in Port-au-Prince pleading for a way out of the country. Women carried babies and young men waved passports and ID cards as they cried out, “Refuge!” and “Help!”

“We definitely need assistance and we’ve asked our international partners for help,” Joseph told The Associated Press. “We believe our partners can assist the national police in resolving the situation.”

The Biden administration reportedly said it would deploy FBI and Homeland Security officials to help with the investigation into the assassination.

More than two dozen people are said to have been involved with the assassination, including two Haitian Americans and Columbian ex-military, according to CNN.