A jury in Virginia has awarded a Black woman $300,000 after she sued a police officer for excessive force and false arrest.

Monica Cromartie, 54, was yanked from her vehicle and forced face-down onto the pavement during a traffic stop on Feb. 12, 2015. Cromartie said she initially got out of her car when pulled over but complied when Petersburg Police Officer Brian Lee Billings told her to get back in the car.

When Billings approached the vehicle, Cromartie seemingly ignored him and told the officer to leave her alone as she complained to someone on her cellphone about the traffic stop. That’s when Billings pulled her out of her car, forced her onto the ground, and held her 100-pound body down using his weight, according to ABC News.

The officer handcuffed her and put her in leg shackles. Cromartie suffered several injuries during the violent ordeal.

Billings said he arrested Cromartie for obstruction of justice. He testified under oath that he “opened the car door,” and “instructed her to get out,” which the police videos do not support, according to a statement shared on the website of Cromartie’s attorney, Thomas H. Roberts.

The statement, in part, reads:

Officer Billings approached the vehicle while Ms. Cromartie was vigorously protesting to somebody else on her cellphone, when he knocked on her window. She replied “What” but continued her protest into her cell-phone. When Billings stated “I need you to roll down your window” and “Ma’am” knocking on the window a second time, she stated “Hey officer, leave me alone.” With mere seconds passing, Officer Billings overreacted in a hostile and violent fashion, opened the driver’s door and ripped Ms. Cromartie from the car and forced her face-down onto the payment and placed his weight on her back with such force that he injured Ms. Cromartie’s forehead, teeth, lip, right eye and right knee before she was handcuffed and then shackled by the legs by other officers.

In 2017, a jury awarded Cromartie $23,499 in damages, but the trial judge ruled Billings had qualified immunity against her claims that the officer violated her Fourth Amendment rights against unlawful search and seizure. Cromartie appealed the ruling and last year the Supreme Court of Virginia agreed with her.

“Neither her vehicle nor her purse could have contained evidence of speeding,” the court wrote, deciding that Cromartie’s Fourth Amendment rights had been violated. The case was sent back to a lower court and a jury awarded her $300,000 for the civil rights violation, the AP reported.

Most of the encounter was captured by police body camera and was used during the two trials.

“She was very glad that after carrying this matter for six years of her life that she finally got the verdict on the constitutional claims that she was looking for, something that demonstrates that the conduct of this officer was not acceptable for the city of Petersburg or for the state,” said Andrew Bodoh, one of Cromartie’s attorneys. 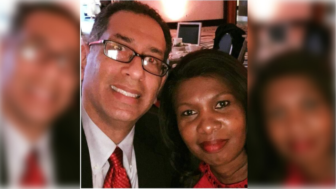 Cromartie has avoided calling the police on two occasions since filing her lawsuit as she fears retaliation. One incident involved a threatening encounter with her estranged husband and another with a neighbor who allegedly wanted to use a bat to settle an argument with Cromartie’s grandchildren.

“She chose not to call the police because of her experience with Officer Billings that made her demonstrably fearful of interacting with the police in the very situation where police should have been called,” Roberts said.

Billings retired from the Petersburg Police Department shortly after the incident with Cromartie and faced no disciplinary action over how he handled the arrest.