EXCLUSIVE: As tax relief from the American Rescue Plan hits the pockets of American families, there is an acknowledgment that more needs to be done to support Black Americans in need

Money from Washington will flow into Black households thanks to these items that are moving on both sides of Pennsylvania Avenue.

Through a White House-driven initiative, direct deposit starting Wednesday will go out to parents across the country thanks to the Child Tax Credit President Joe Biden hopes to make permanent. Administration officials have touted that the effort contributes to their goal of cutting child poverty in half.

The Biden Treasury Department found that before the American Rescue Plan (ARP), which was passed by Democrats in Congress and signed by President Biden in March, over half of Black and Hispanic children were in families ineligible for the full child tax credits because they generated “too little earnings.” 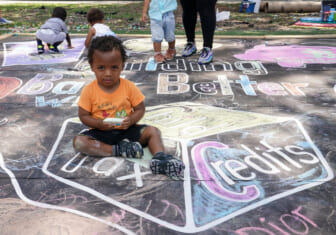 Massachusetts Congresswoman Ayanna Presley, who serves as the vice-chair of the House Task Force on Aging and Families told theGrio, “Child care is as much about the GDP as it is about our families,” adding “it’s really critical that we are making those investments both in human infrastructure and in physical infrastructure.”

The child tax credit deposits headed to bank accounts of millions are not meant to be used as savings. The government hopes the funds are spent on items like child care and subsequently help move the economy.

The White House says the investments offer a high return. Biden officials are pushing a study that found that families who get more refundable credits do better in school and score higher in standardized tests and are more likely to graduate high school and attend college and make more money. Those kids are also less likely to face physical disabilities like diabetes.

The Biden Administration is eyeing more investments in people through the care economy.

Tina Tchen, the ex-chief of staff for former First Lady Michelle Obama and now president and CEO of Time’s Up, supports the Biden administration’s Build Back Better Program with ”incredible historic investments in caregiving.” 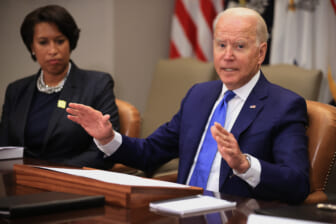 Tchen told theGrio during her Wednesday visit to the White House, that money is still being left on the table as it relates to what’s due to families. The White House is still weighing a decision as to whether women are going to be eligible for federal support like affordable child care and affordable elder care as caregivers.

According to Tchen, as it stands, caregivers don’t have fair wages and they are not protected by labor laws. She boldly offered the plan to financially support caregivers as means to undo the ugly residue of the enslavement of Africans in America.

“It goes back to slavery when nobody paid for the domestic slaves that were going to take care of the kids,” Tchen explained. “To the New Deal, where domestic workers then were specifically left out of the labor protections during the Nixon administration.”

Another area of labor where Black America is seeing movement is in the restaurant and small business sector.

Because of the significance of restaurants in this economy, there is a focus on building up Black restaurants. Black restaurant owners are getting a much-needed boost from a partnership between the National Urban League and PepsiCo Foundation.

National Urban League President Marc Morial told theGrio, “We’re going to be serving a hundred restaurants with $10,000 grants and a suite of, if you will, coaching, counseling and consulting services through our entrepreneurship centers.”

Black businesses saw significant shortfalls during the COVID-19 pandemic with as many as 41% of businesses disappearing from the market.

Morial contends that half of those businesses will never return.