President Cyril Ramaphosa toured the Ndofaya Mall in the Meadowlands part of Soweto, where at least 10 people died in the ransacking.

South Africa’s unrest erupted earlier this month when Zuma began serving a 15-month sentence for contempt of court. He had defied a court order to testify at a state-backed inquiry investigating allegations of corruption while he was president from 2009 to 2018.

The protests quickly escalated to a weeklong spree of violence, South Africa’s worst rioting since the country achieved majority rule democracy in 1994. The unrest hit the KwaZulu-Natal province, which is Zuma’s home area, and Gauteng, South Africa’s most populous province, which includes Johannesburg, the country’s largest city. Trucks were burned, strategic highways blocked and thousands of rioters ransacked malls and shopping centers in the two provinces. 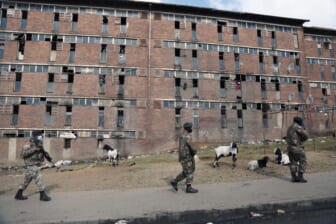 In the eastern port of Durban, rioters attacked industrial areas, where they emptied warehouses and factories and arsonists set them alight.

At least 212 people died in the unrest, many trampled to death when shops were looted, said police. More than 2,500 people have been arrested for theft and vandalism.

Looking at the shattered glass entrance to a cellphone shop Sunday in Soweto, Ramaphosa was told several people died there.

“We are all really concerned about what happened here,” Ramaphosa said. “But we are also saying we have learned valuable lessons. The most important lesson is, in the end, that we must tighten up our security forces.”

Thanking the community volunteer groups helping to clear up the debris, Ramaphosa, speaking in the Zulu language, reiterated his pledge that those who plotted the rioting would be brought to justice.

“They’ll be arrested, all those who are behind this damage,” he vowed sternly. “We are going to make sure that they are arrested and sent to prison for a long time.” 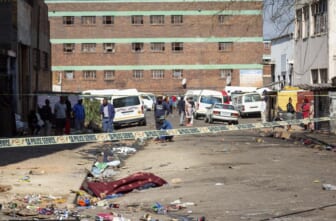 He thanked law-abiding South Africans for standing together against the lawlessness.

Ramaphosa spoke on the anniversary of the birth of Nelson Mandela, the country’s first Black president, whose election in 1994 marked the end of South Africa’s brutal apartheid regime of white-minority rule. To honor Mandela, many South Africans on Sunday did acts of community service.