Henry "Enrique" Tarrio and others removed a Black Lives Matter flag from Asbury United Methodist Church and set it aflame.

The leader of the far-right extremist group Proud Boys has pleaded guilty to burning a banner hanging from a historic Black church.

The vandalism occurred on Dec. 12 when Henry “Enrique” Tarrio and a group of his affiliates removed a Black Lives Matter banner from Asbury United Methodist Church in Washington, D.C., and set it aflame. The Miami, Florida man later posted about burning the banner on social media.

Tarrio, 37, was arrested for the destruction of property on Jan. 4 as he arrived in D.C. for the “Stop the Steal” rally that would days later lead to the Capitol insurrection on Jan. 6. When apprehended, he was found to be in possession of two high-capacity firearm magazines that bore the insignia of his organization. He was then also charged with attempted possession of a large-capacity ammunition feeding device.

As previously reported, Tarrio was not present during the Capitol insurrection because he was in jail. However, he later acknowledged that his group participated, and he expressed no remorse for what happened that day.

“I’m not going to worry about people that their only worry is to be reelected,” he said back in February of lawmakers who feared for their lives that day. 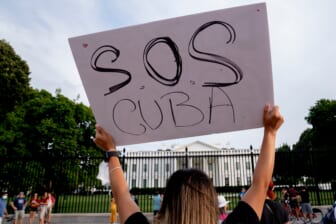 Also Read:
Will protests lead to lasting change in Cuba?

“I’m not gonna cry about people who don’t give a crap about their constituents. I’m not going to sympathize with them,” he told CNN. “When they support drone-bombing children in the Middle East … [and] those people are dead and they’re just cowering because a group of misfits came into the Capitol, I’m not going to be sympathetic.”

Tarrio, who identifies as Afro-Cuban, said members of the Proud Boys should not have smashed in buildings of the historic building, but blamed the Capitol Police for “their inability to respond” to the attack.