The boyfriend of a woman who was found decapitated on Thursday on a Minnesota sidewalk has been arrested and charged with her murder.

America Mafalda Thayer, 55, was found dead in Shakopee, a city southwest of Minneapolis, after police were called to a stabbing incident in the early afternoon.

According to the Shakopee Police Department, “Officers quickly apprehended 42-year-old Alexis Saborit of Shakopee on suspicion of second-degree murder. He is being held in the Scott County Jail pending charges.”

Investigators from the Shakopee police are probing Thayer’s death. The Minnesota Bureau of Criminal Apprehension processed the crime scene.

It was later disclosed to Fox 9 that the woman’s head was found next to her body.

At the scene, officers found a sheath for a large knife in a nearby yard. They found a knife in a trash can in an alley in the area. The police also recovered a shirt and bloody shoes in a nearby trash can, according to an affidavit.

Saborit was spotted by the police walking near Shenandoah Drive and 4th Avenue, where he got arrested at around 3:20 pm, reportedly still bloody from Thayer’s murder.

According to local news, a coworker said Thayer, a Cuban immigrant, worked at Dollar Tree in Shakopee, as well as at MyPillow. She had reportedly been in a long-term relationship with the suspect, and domestic abuse was said to have been a consistent problem. 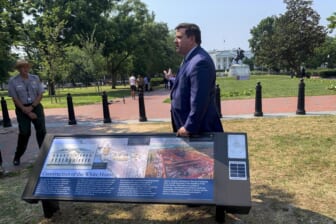 Saborit had been previously convicted of gross misdemeanor domestic assault; it is unclear if Thayer was the case’s victim. Saborit is also facing arson charges for trying to burn down his own apartment in 2020.

Thayer’s family and friends gathered near her home to hold a vigil. Coworkers said she was “a bubbly person, always smiling. Just sweet,” said Eileen Necklen, who worked with Thayer at Dollar Tree. 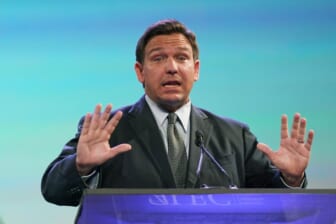 “With all the gruesome video going around and the pictures going around, we just needed a time for everyone to heal and come together and remember her for who she was, and not for what happened,” said her friend, Mikala Dickerson.

Thayer was known as hard-working, close ones said, sometimes clocking more than 70 hours a week between her two jobs.

Saborit is currently being held in a county jail, pending arraignment.