Embattled emcee DaBaby has been under fire since his homophobic rant from Rolling Loud went viral last week.

While the backlash from DaBaby‘s viral Rolling Loud rant continues, the rapper has shared an official apology to his Instagram after he was dropped from the line-up of the 2021 Governor’s Ball, Lollapalooza and the Day N Vegas festival.

As TheGrio has extensively reported, at an appearance at Rolling Loud music festival in Miami last Saturday, the rapper went on a rant, in which he said to the audience: “If you didn’t show up today with HIV, AIDS, or any of them deadly sexually transmitted diseases, then put your cellphone lighter up.”

While DaBaby has made several comments admitting his comments were “insensitive”, the criticism continued for the rapper. Now, DaBaby has released an official apology on his Instagram.

The black and white post begins with the rapper lamenting over social media and the cultural response to his comments, with him stating, “Social media moves so fast that people want to demolish you before you even have the opportunity to grow, educate, and learn from your mistakes. As a man who has had to make his own way from very difficult circumstances, having people I know publicly working against me — knowing that what I needed was education on these topics and guidance — has been challenging.”

One of the biggest music festivals to drop the rapper in wake of his rant has been the Governors Ball, a popular New York music festival marking its 10th anniversary this year. DaBaby was originally set to play the festival the weekend of Sept. 24-26 at Citi Field, he has now officially been removed, as of 6 a.m. Monday morning.

A statement released along with the news reads: “Founders Entertainment does not and will not tolerate hate or discrimination of any kind. We welcome and celebrate the diverse communities that make New York City the greatest city in the world. Thank you to the fans who continue to speak up for what is right. Along with you we will continue to use our platform for good.”

The Day N Vegas festival also dropped the rapper on Monday morning, writing in a post that he will be replaced by rapper Roddy Rich. The caption reads, “DaBaby will no longer be appearing at Day N Vegas 2021. Roddy Ricch has been added to the lineup.”

On Sunday, the rapper was taken off the Lollapalooza performance roster, replaced by Young Thug. Show officials said “Lollapalooza was founded on diversity, inclusivity, respect, and love. With that in mind, DaBaby will no longer be performing at Grant Park tonight.” 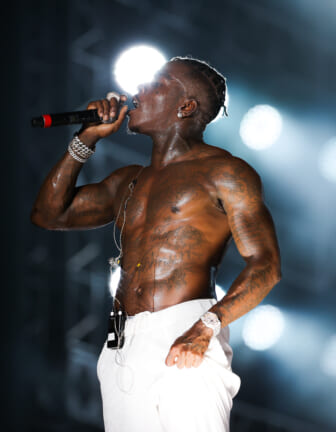 DaBaby has seen backlash from fellow celebrities as well. Dua Lipa, with whom he collaborated on her song “Levitating,” released a statement shortly after the video went viral. She wrote in an Instagram Story: “I really don’t recognize this as the person I worked with.”

“I know my fans know where my heart lies,” she posted, “and that I stand 100% with the LGTBQ community. We need to come together to fight the stigma and ignorance around HIV/AIDS.”

In response to The Roots drummer-producer Questlove‘s criticism, DaBaby wrote in an IG repost of Quest’s words, “I ain’t even tryna be funny when i say… I do NOT KNOW WHO DIS NI**A IS DAWG.” That dug his hole even deeper on social media.

Gay music icon Elton John also released a statement condemning his rhetoric, writing on social media, “Homophobic and HIV mistruths have no place in our society and industry and as musicians, we must spread compassion and love for the most marginalised people in our communities.”

“A musician’s job,” John reminded, “is to bring people together.”