"My mama was a great woman," Saunders wrote to her Twitter followers, "and will forever live through me."

After becoming a success story of the Tokyo Olympics, shot putter Raven Saunders was immediately thrust into mourning. Her mother, Clarissa Saunders, passed away just days after her triumphant silver-medal victory.

She retweeted a news story about the passing, telling her Twitter followers, “Hop[p]ing off social media for a while to take care of my mental and my family. My mama was a great woman and will forever live through me. My number one guardian angel. I will always and forever love you.”

In an Instagram post of light family moments, she wrote, “I’ll miss your love, your smile, your hugs, your advice, your jokiness, your random twerks. Our last conversation was one of the best ever.”

The openly gay shot putter — who is known for her twerk moves after competing — confirmed that her mother witnessed her efforts in Tokyo at a watch party on Sunday.

Live5News interviewed Clarissa Saunders, who said, “It’s crazy,” of her daughter making it to Tokyo.

“Not being there is a little bummer, but, hey, we’re cheering from here,” she continued. “So she’ll do good; I’m pretty sure she’ll do good.”

Her cause of death has not been determined. However, John Tecklenburg, mayor of their native Charleston, South Carolina, said in a statement that he is “heartbroken to hear of the tragic loss of Clarissa Saunders, beloved mother to Raven Saunders and a cherished member of the Charleston community.”

“She was Raven’s strongest supporter,” he added, “and joined us just this past Friday to cheer her daughter on as she qualified for the Olympic shot put finals … On behalf of the citizens of Charleston, we pray for Raven and her family, and join them in grieving this unimaginable loss.”

As previously reported, Raven Saunders was being scrutinized for her brief gesture of protest from the medals podium. The athlete raised her arms in the form of an X, later telling reporters the sign is “the intersection of where all people who are oppressed meet.”

While her twerk move was light-hearted and fun, Saunders’ stance is also trending as the first American to push back against the International Olympic Committee’s restrictive rules for protests, as the Tokyo Olympics takes place in the wake of the coronavirus pandemic and the Black Lives Matter movement, theGrio reported last week. 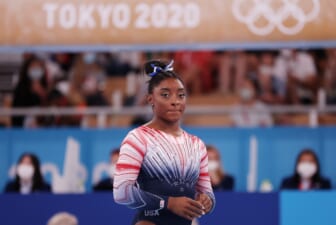 According to reports, the U.S. Olympic and Paralympic Committee said Saunders’ gesture during her medals ceremony “was respectful of her competitors and did not violate our rules related to demonstration.”

“Raven Saunders,” one user wrote. “What the Olympian’s X protest means to her. Discriminated and oppressed groups have more in common than difference, and so many people are a member of multiple groups yet feel alone. Love this message by Raven Saunders. Absolute legend.”