Good for Rihanna, but billionaires as we know them aren’t something to celebrate

OPINION: The notion of a Black billionaire is often presented as some sort of communal victory but exactly how do their economic achievements help the rest of us?

Are people seriously celebrating Rihanna becoming a billionaire? Have we gone mad? Don’t get me wrong, Rihanna is a lovely person and a great recording artist. I’ve loved her since “Pon De Replay.” I’m a fan. And I salute her business success as it’s not based on white privilege or having a rich family, elements that are essential to the story of most billionaires.

Instead, Rihanna built a great image, and then, with the help of LVMH, one of the biggest brands in the world, she constructed a company, Fenty Beauty, that creates quality makeup for Black and brown women in shades that most other lines neglect, and now Rihanna owns 50% of a company that’s worth $2.8 Billion and growing.

All of this couldn’t have happened to a nicer person. I have no beef with Rihanna, no, my critique is of people celebrating her ascension as if it’s a victory for anyone but Rihanna. My critique is also of capitalism because every billionaire represents a failure of capitalism — for a person to acquire that much wealth that means many other people must be poor.

In America, the richest 1% own more wealth than the bottom 90%. The system is constructed in a way that allows them to use their wealth to create more money while the majority of us lack access to investments and assets that allow our money to make us money. The rich can make money from money while most of us can only make money from time. Wealth inequality is becoming so entrenched that we are moving toward a permanent class system, as in, the class that your father was born into is the class that 99% of Americans will stay in for their entire lives.

Over the last 30 years the amount that the top controls has grown and the amount the bottom controls has dropped. The wealth gap is getting worse. That means the core of America is dying because you can’t have democracy in a country where a small number of people have the overwhelming majority of the wealth. It’s possible if Rihanna’s wealth is largely compromised of stock in Fenty Beauty, that when she pays taxes she pays a lower percentage of her income than her assistant does.

Billionaires happen because of intelligence and work — and, usually, help from generational wealth — but also thanks to the political system. Billionaires control politics. The game is this: a small group of people have a ton of money, they donate a lot of it to politicians on both sides and those politicians do whatever they can to help the wealthy acquire more and pay less in taxes, which leads to the wealthy donating more and gaining even more power. Rinse and repeat, leaving the average person far behind.

Politicians help shape taxation, extend copyrights and trademarks, allow virtual monopolies, give large companies huge breaks, and create favorable business conditions that help the rich become much richer. Decades ago, the average worker had a union standing up for their rights but after a decades-long assault by the Republican Party, most unions are weak and unable to give workers the bargaining power that people like them had decades ago. 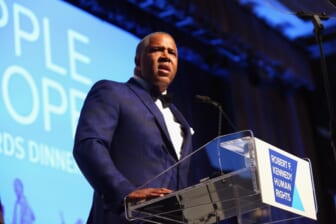 Also Read:
Billionaire Robert Smith breaks silence after tax case: ‘I can learn from my mistakes’

The rise of globalization — corporations making products in foreign countries where they can minimize construction and fabrication costs — are also part of funneling more money to the rich and squeezing the poor. All of this empowers the wealthiest while disempowering the middle and working class. So where exactly is the existence of Black billionaires beneficial for most Black people? As a symbol of hope?

The notion of Rihanna or Oprah or Jay-Z or Lebron or Dr. Dre as a billionaire is often presented as some sort of communal victory but exactly how do their economic achievements help the rest of us? Sure, there are some great philanthropic events — Lebron’s school in Akron is changing thousands of lives as is Oprah’s school in South Africa — but these are small expenditures for billionaires.

These people could change the world. If having billionaires is so good for the community at large then where are the truly disruptive events? One in 4 Black children experienced food insecurity in 2020. One in 5 Black people live in poverty. If you had the ability to end those sorts of problems, wouldn’t you? Billionaires do. Many people talk about reparations — I once spoke with a famous white billionaire who was considering a massive donation to Black communities that he said would represent a form of reparations. He said the wealth gap remains a barrier to creating equality and it needs to be addressed in an aggressive way — it will never just work itself out.

Five Black billionaires could get together and peel off $100 million each, an amount they would barely notice, and create a $500 million fund that could be used to change the lives of millions of Black Americans. Home loans to help create wealth. Free college for thousands. Food for the poor. Funds for bail. Debts erased. Massive change. This is the Black billionaire analog to Harriet Tubman pulling people out of slavery — ending the wealth gap is a step toward true Black liberation.

That is what using wealth to pull people to freedom looks like. That is what a communal victory looks like. Black billionaires could be economic superheroes who save millions of poor Black people and change their lives forever. Actions like that are what’s worth celebrating.