The member of the Pivot Gang rap crew was fatally shot Monday, as was his uncle, reportedly in front of his grandmother's home.

Chicago hip-hop fans and supporters are mourning the death of DJ SqueakPIVOT, a member of the Pivot Gang rap crew. He was 26.

The music man born Javunte Wheeler was shot and killed on Monday, reportedly in front of his grandmother’s home. His uncle, Derion S. Hood, 27, was also fatally shot.

Wheeler’s rap collective informed fans of his death on Tuesday on their official Twitter page, writing, “We are heartbroken to share the news of the passing of one of our own, Squeak Pivot. We appreciate the support from the community at this time and ask that you keep Squeak’s family and friends in your prayers.”

“Squeak found his voice as a DJ and producer,” they added, “becoming known as a Chicago staple and touring the country with his sound as a DJ and member of Pivot Gang. Being on this journey together while witnessing his growth as an artist and brother is something we’re extremely proud of.”

“We will miss his infectious smile, his love for music, and the love he showed to everyone who came into contact with him,” said his artistic family.

According to People magazine, Chicago Police said that both men were shot in the head by “an unknown offender,” they died of their injuries after being transported to a local hospital.

Recent reports indicate that Ring doorbell surveillance video shows the pair were murdered by a passenger in Wheeler’s vehicle, someone he knew. The person is recorded getting out of the car, shooting them, then getting in the driver’s seat and pulling away.

Supporters of the Chicago-based collective shared their condolences on social media.

In a September 2020 interview with The Triibe, Wheeler told Rome J, “I made beats because I needed something to do while I was on house arrest. I just started making beats with gang [Saba and Dae Dae]. I got into DJ-ing because my homies ain’t have no DJ.”

He released a solo EP called En Route in June of this year. 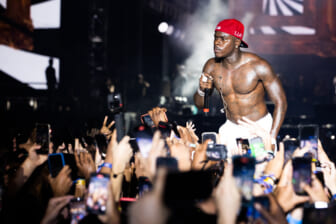 Wheeler told the outlet last year that he was inspired by previous successful Chicago acts, saying the city was known for hustlers. “I’ma West Side ni**a, an entrepreneur,” he said. “Like, that’s who I am. This sh– just in me. We know how to get it. We know how to make sh– happen. It’s just us. It’s always just been in me too. My OG used to tell me that sh– all the time: ‘Since you been a kid, it’s seemed like you been here before.’”

In his last tweet on Monday, Wheeler wrote, “Can’t be uh fallen (star emoji) if ya head still high.”

Fans are still posting condolence comments under the final message from the artist on the rise.