Antonio Brown was booted from the Buccaneers’ joint practice with Tennessee on Thursday after he punched Titans cornerback Chris Jackson. 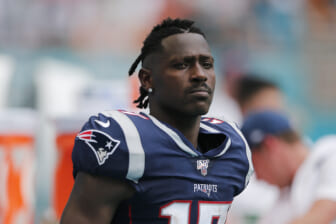 Brown and Jackson were doing some one-on-one drills when things turned violent, TMZ reports. The veteran receiver reportedly complained that he was being held by Jackson so he grabbed his helmet and ripped it off Jackson’s head.

One Twitter user reacted to the incident by noting that Brown signed a one-year deal with the Tampa Bay Buccaneers, so “not a problem to cut bait if they chose to.”

Another tweeted, “This is exactly what happened in Pittsburgh, people babied him and made excuses for him constantly. Tampa Bay is falling into that same trap except, brown isn’t nearly as good as he used to be.”

A third added, “AB is human. Everyone makes mistakes. Can’t keep bringing up his past everytime something goes wrong. Even calm level headed players like Andre Johnson got into altercations. Stop the hate.”

Gene Villarreal, another football fan on Twitter wrote, “Camp fights happen all the time. It’s hot out there, both teams talking shit It’s going to happen. Raiders- rams practice ended early because of fighting. This is a thing because it’s AB. No one is getting suspended. Safe to say no starters be playing week 2 of preseason.”

“That wasn’t our focus,” Simmons said about incidents, via ESPN’s Turron Davenport. “Our focus was to come in and do what our coaches teach. It’s football. It’s competitive. You’ve got a lot of guys competing for jobs, for spots. … There’s going to be guys chipping off, guys talking smack, or whatever it may be. But we don’t want punches thrown or anything like that.”

“Great practice,” White told reporters afterward, Yahoo reports  “A lot of grown men, competing with emotions. Things happen. Just gotta protect your brothers. I was just trying help one of my brothers. I just seen one of my brothers getting tossed around, so I just tried to help him. That’s all.”

Tampa Bay coach Bruce Arians told reporters none of his players will be punished for the fights that happened during practice.

“Really pleased with the work we’ve gotten the last two days — extremely good competition,” Arians said. “Obviously, it always happens when the flyers and the gunners get together, something starts. But it was spirited, it was great practice and I really appreciate the Titans for coming down here and helping us get better, and hopefully we made them better.”