Fresh off his MVP performance in the 2021 NBA Finals, Milwaukee Bucks forward Giannis Antetokounmpo is investing in a local business — the city’s professional baseball team, the Milwaukee Brewers. 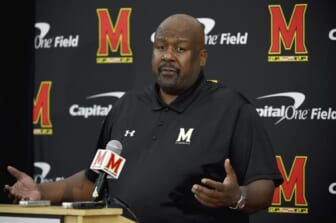 The baseball club announced that the NBA all-star has purchased a stake in the MLB team during a press conference on Friday, according to ESPN.

“Man, this is unbelievable,” Antetokounmpo said. “This is a dream come true for a kid from Sepolia, Athens, Greece, born from immigrant parents. I could have never imagined I would be in this position.”

Antetokounmpo, known as the ‘Greek Freak,’ wore a Brewers jersey to the press conference, adorned with the number ’34,’ his jersey number with the Bucks. He sent out a photo on social media, featuring the light-hearted caption, “Now i just have to work on my swing!!”

This is just the latest example of a professional athlete investing in a team in the city they play in but in a different sport. In July 2020, Kansas City Chief quarterback Patrick Mahomes bought a stake in the Kansas City Royals, as reported by Sports Illustrated.

Mahomes, who led the Chiefs to a Super Bowl victory in 2020, expressed that the process took over a year, but he’s happy that to “be part of something that’s going to be long-term” that will “be in Kansas City for a long time.”

Antetokounmpo also is firmly putting his roots down in the city he plays in. Last December, the then two-time reigning NBA MVP signed a five-year supermax contract extension with the Bucks, worth $228 million, as reported by the New York Times.

“You took a chance on us eight years ago and now putting my signature on a contract like this is unreal — but it’s all because of hard work,” Antetokounmpo said of the Bucks, who drafted him in 2015. “This is my home and I’m going to continue working hard and do my best to make the Bucks, our fans and the city proud. Let’s have fun, win and make these years count.”

Antetokounmpo made good on his word to make the city proud soon after re-signing. In July, he led the Bucks to the 2021 NBA Championship in a 4-2 series victory over the Phoenix Suns, as previously reported by theGrio. It was the team’s first title since 1971.

He celebrated by patronizing another ‘local’ business. He and his girlfriend, Mariah Riddlesprigger headed to a Chick-Fil-A the day after his championship victory, to the delight of the franchise’s employees and a glut of fans that gathered once they realized he was nearby.

As theGrio reported, Antetokounmpo, who had both his MVP and the Larry O’Brien championship trophy with him, took pics and videos with fans, capturing it all on his Instagram Live. He ordered a 50 piece ‘nugget’ meal in honor of the 50 points he scored in the last Finals game, then asked if he might get a Chick-Fil-A endorsement from what looked like an impromptu trip to the popular eatery.

Or it’s possible that Riddlesprigger could have initiated the visit if any cravings kicked in, as she’s visibly pregnant with the couple’s second child. Their first child, son Liam, was born in Feb. 2020.

Watch his full live below: