Boxer Gervonta Davis is thankful to be alive after surviving a minor plane crash. The 26-year-old walked away nearly untouched.

Davis went live on Instagram on August 21 to give a detailed account of the scary incident. He says he and his crew finished boarding the plane and prepped for takeoff, but the private jet failed to take off properly, causing a crash landing back on to the airport grounds.

Per TMZ, the aircraft doesn’t appear to have gotten too far in the air before the crash as everyone was left practically uninjured. 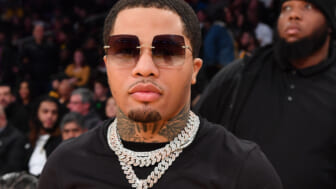 Also Read:
Gervonta Davis is a raggedy piece of sh*t, and why enough is enough

“We didn’t even get up off the air,” Davis is overheard saying in the video. Davis said he is experiencing some pain, explaining that his butt was in pain and his feet were wrapped with gauze bandages.

“I got f—ing splinters in my feet,” he said. “My a– is on fire. The plane didn’t even take off. It took off but it didn’t take off. I’m good, it’s just my a– hot. I’m sitting on this hot a– concrete.” Davis was filming while sitting close to the scene of the crash.

“My sh– feels like it’s boiling…I can’t even sit yo,” he said. “You ever been whooped before, wet with a switch or a belt?” He asked someone in his crew. “That’s how my a– feel right now. I’m sweating, I’m shaking.”

He also shared some photos and videos of the aftermath. Fire and rescue showed up to evaluate the damage and care for all involved.

What contributed to the malfunction is not clear, but a report noted that overheating may have been a factor. Flight maneuvers the pilot used while taking off could have also been a factor.

Regardless, Davis is happy he wasn’t hurt. “I’m definitely thankful,” he said. “God is good.” 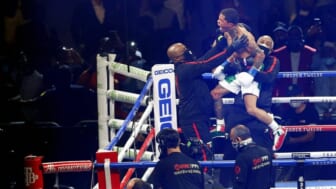 TMZ reached out to the boxer and his camp for comment, but hadn’t heard back at the time of the report.

Davis recently received acclaim after a June 26 knockout win over fellow boxer, Mario Barrios. He is currently the WBA super lightweight champion. His current stats show him as undefeated at 25-0, and he’s secured WBA belts in three different weight classes. Davis currently ranks No. 2 in the junior lightweight category behind Óscar Valdez.

His next fight is scheduled for October. Davis made the announcement via Twitter, posting, “Oct, I’m back.”