The "Crank That" rapper took to Twitter to air out his feelings about West, who left him off of a "Donda" track he recorded a verse on

It may be Donda season, but Soulja Boy is not having it. In a recent interaction with TMZ, Soulja Boy revealed he wants to fight Kanye West “in the ring” amid his beef with the fellow rapper. 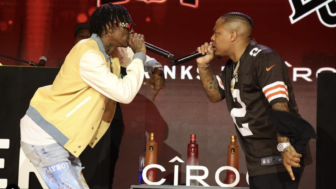 On Sunday, West dropped his long-awaited album Donda, after multiple listening parties and leaked verses. On social media, many recordings of verses and earlier editions of the songs made their way online, with fans expecting certain artists to be on the final version of the album.

Soulja Boy was reportedly featured on a track, “Remote Control” but was cut from the song by the time the album dropped.

This, clearly, did not go over well with the “Crank That” rapper.

On Monday, a day after Donda’s release, Soulja Boy took to Twitter to let his fans and followers know all about his beef with West.

He wrote, “If he didn’t like the verse he should of said that don’t text me acting like u f— wit it then secretly take it off. What kind of sh—is that I was working on my album too I don’t got time for this sh—. “

He then wrote, “I might diss u everyday for the rest of my life how I’m feeling @kanyewest,” before his now-viral tweet where he then posted a picture of him and West’s estranged wife Kim Kardashian West, writing, “I was the first rapper wit @KimKardashian not u…@kanyewest.”

But Soulja Boy did not stop there. He then continued to taunt West, writing, “I wanna fight. Do u know how to fight? @kanyewest I feel like u a h-e. Let’s get in the ring?”

The rapper broke down his tweetstorm when he ran into TMZ in Los Angeles on Monday.

Soulja Boy didn’t stop there with his taunting.

He continued to tweet, bringing up old beef between West and Taylor Swift from years ago, and West’s recent support of former President Donald Trump. He wrote, “U P—. U really wore that trump hat too. You did a-lot of corny sh— in ur career and got a pass. B—- ass n—- apologize to Taylor swift @kanyewest.”

He continued, “If u would have ran on stage and snatched a mic from my hand I would have knocked yo ass out live on MTV @kanyewest.”